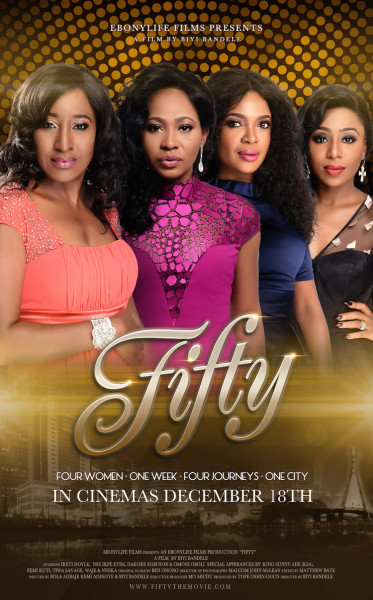 The coming New Year is definitely bringing in new things for the Mo Abudu Production ‘FIFTY’. According to a story received via email, despite competition from about 8 films to which ‘Star Wars; The Force Awakens’ is part of, FIFTY has triumphed gallantly at the box office, consistently selling out shows in Ikeja, Abuja, Surulere, Lekki, Ibadan, Akure and other locations across the country. The movie joins other Nigerian box office movies such as “30 Days in Atlanta as well as “IJE” to achieve such a record.

FIFTY, which earlier on premiered before a global audience in London at the prestigious BFI London Film Festival, is set to go into the record books as the premiere of the century, one which attracted highly respected VIPS and the crème de le crème in Nigeria.

Now available to watch in every cinema across the nation, FIFTY continues to enjoy various patronages. For recording the highest-grossing opening weekend for any Nigerian film, FIFTY is now certified as the Number 1 Nigerian film of the year, with Box Office analysts predicting that it should end in over N100m by the end of January 2016, a conservative projection based on the traditionally slow January period.

One thing is, however sure, the support FIFTY continues to garner among Nigerian audiences is amazing and highly commendable, going to show that Nigerians do support their own as FIFTY’s success has been borne out of an appreciation for the quality and relevance of the film.

Now in cinemas across Nigeria, cinema goers who have yet to see the movie cannot afford to miss out on this box office phenomenon!

Have you seen the movie ‘FIFTY’? Is it truly worth its hype?