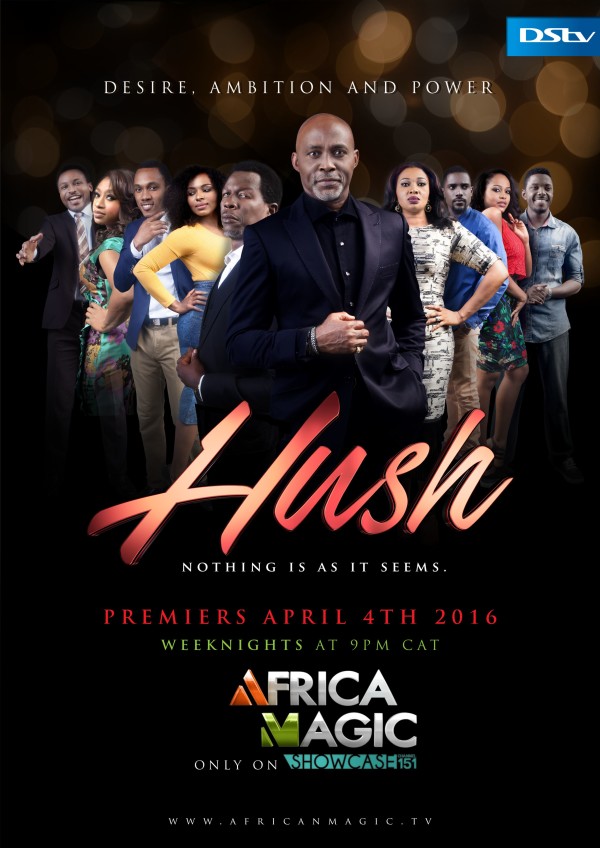 On the 4th of April 2016, viewers across Africa will welcome a new and exciting telenovella to their screens as Africa Magic premieres “Hush”, a tale of fashion, politics and ambition which follows different members of high society as they collide.

The story of Hush revolves around Bem and Arinola, power-players in fashion and politics respectively. Bem, played by Richard Mofe-Damijo, is one of Africa’s biggest designers based in Lagos State, Nigeria, and Arinola, played by Thelma Okoduwa, is one of the state’s fastest rising politicians. The intrigue begins when Bem proposes marriage to Arinola, an action that sets in motion a chain of events propelled by the secrets in their respective lives; secrets that run through the backrooms of secret societies, the corridors of the judiciary, and on social media.

The Director, M-Net West Africa, Wangi Mba-Uzoukwu, said: “Hush is an exciting telenovella that explores the intriguing relationship between two powerful individuals, and the power tussle between players in fashion, politics, and high-society. The storyline is unique even as the acting promises to be exciting, given the caliber of the cast and crew involved. We are excited for our viewers and urge them to tune in to catch Hush. There’s a co-dependency of which not all players are aware. Sometimes this is a healthy relationship, often times not. The cast of Hush is stellar and the show marks a return to television for a number of renowned actors and actresses. All these factors make for exciting viewing and we can’t wait for our viewers from all over Africa to tune in.”

For more information on Hush and the Africa Magic channels and programming, please visit here

Previous Post What Rocked and What Sucked at the #AMVCA2016