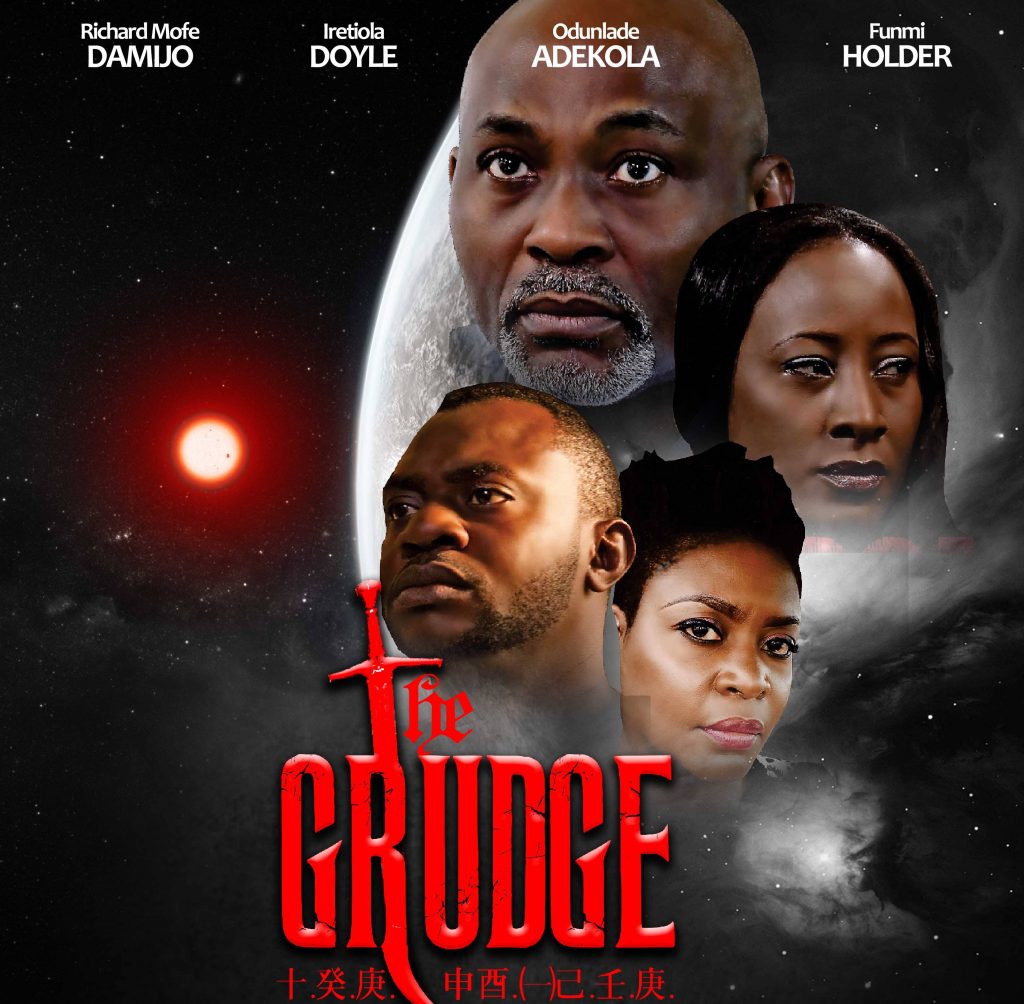 “The lives of two lovelorn partners (Iretiola Doyle and Richard Mofe-Damijo) and a lonely widow (Funmi Holder) intersect as they struggle to deal with a grudge that has festered for so long.”

With the many Tinsel faces, this film is disappointingly loose, that is, hardly gripping. The pace is too slow. The jokes are too much. The soundtrack was a drag. It felt like watching a TV series with a killer run-time/duration. If you’re looking for some adrenaline shoot, then no – this is not the film. The respite came with Taju (Odunlade Adekola) and Chikodi (Ijeoma Aniebo playing his wife) when she asked for money for his daughter’s new clothes and shoes. One should have seen the face on the little girl… hilarious!

In The Grudge (like in Fifty – 2015), men are unforgivably paraded as nagging (Tayo) or irresponsible (Taju). Makeup was amazing on Ebere (Funmi Holder) as costumes were on Tayo (RMD). But on the other hand, subtitles were constantly displayed before the actors said their lines. This robbed any and all of the surprises that may have been in store.

Odunlade Odunkola (Jenifa, Taxi Driver: Oko Ashewo), inarguably the biggest Yoruba actor, brought the needed comic relief in this film. He recently starred, produced and directed a new movie called Adebayo Aremu Abere. His depiction of Taju was hilarious most times. Taju’s English was in tatters, like Jenifa’s, but unequally louder. The only issue with this character was that he hardly had any sustained sober moments and his wife-brutality was treated too lightly (by the script-writer) for comfort.

In a certain scene, we find Kemi (Ireti Doyle) speaking inaudibly for a few seconds, a fault with either production or the Silverbird Cinemas speakers. It wasn’t until the very end, the final five minutes, that this film eventually begins to get interesting. The plot bears a resemblance to Unfaithful (2002) – a film starring Richard Gere where a partner metes out the ultimate punishment for being cheated on. Compared to Unfaithful, the genders and screenplay went in different directions.

Directed by Yemi Morafa (Creative Director at Filmboyz Inc), The Grudge is sadly boring and (for me) felt like a gross waste of time.

Watch the trailer below: