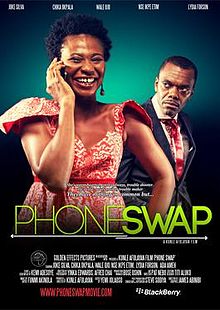 Nse plays Mary, the talented and overworked tailor who is also highly disrespected by her very lucky boss who has no idea about the business she is leading. Mary does the work and her boss takes the accolade and when Mary has to travel back home when her father (played by Chika Okpala) calls her due to her sister (Cynthia) having problems with her husband, her boss who was given a date line to complete an outfit she had left Mary to take charge of, has to pay for her flight to Owerri. On her way Mary clashes with Akin and there is a Phone Swap that leads to a revelation of an interesting spectacle.

Phone Swap has a very interesting storyline. Akin is quite stuck-up and that is why his colleagues choose to sideline him and he has to send his personal assistant played by Hafeez Oyetoro to spy and get the date of a conference. Mary, on the other hand is dealing with heartbreak, an unbearable boss and family drama and when their paths cross we get a beautiful comedy. Akin ends up in Owerri and Mary in Abuja.

There were questionable scenes in the film. Some things didn’t add up but it is probably the writer’s way of inciting laughter. The storyline is great because despite Mary’s little background of an education, she is a strong, determined woman with a great sense of self-worth. The best part of this story comes when Mary bonds with Kike Cole (Joke Silva) and here we don’t see an aggressive mother but a woman that bears comfort and extends comfort to a stranger that is not even of her class. Best part, her show of comfort has nothing to do with her desperation to win back her son. It is natural.

Acting was really great and is one of the great elements of the film. Nse is always excellent and she fits into her roles perfectly. She manages to combine smartness and vulnerability in a way that makes you love the character of Mary. The moment she shares with Kike (Joke Silva) stands out for me in this film. Joke is excellent as the loving mother and the best part of the film, is during dinner when Kike notices that Mary cannot use a cutlery properly. That moment was swift but something there captured the heart. It was good acting.

Lydia Forson stood out. The unstable, jealous and frustrated girlfriend, she does really well playing Gina. Wole Ojo does a great job too, when he finally smiles and changes his composure from the uptight young man, it was absolutely refreshing to watch and from there on, I felt really happy with this film.

Yinka Edward has proven to be Kunle Afolayan’s best ally. They work really well together. His ability to capture Kunle’s direction and translate it to a visually appealing film compares to no other. Cinematography was of course, excellent and well thought of. The locations of the film were well explored from Owerri to Abuja and back to Lagos. The sound was also great. There were no interruptions.

The effort put towards directing translated to the work we saw at the end of it all. Good directing made the film the masterpiece it is.

Xplore scores Phone Swap with an 8/10