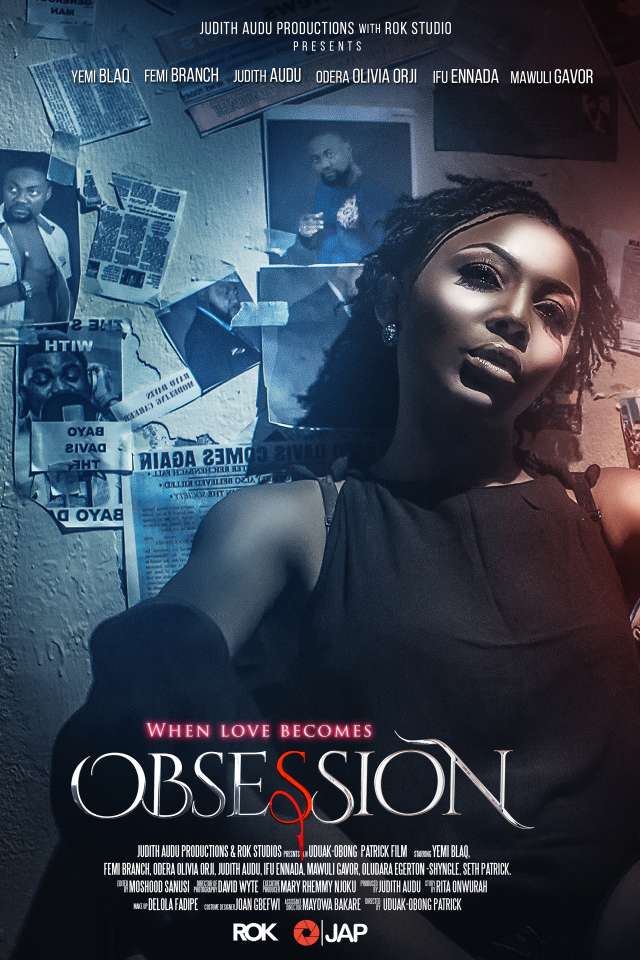 Obsession juggles in a dizzying array; a star studded cast and a thinly written script based  loosely on the Beyoncé/Idris Elba 2009 flick of the same name. The result is a mirage that struggles to meet its gargantuan ambition.

Obsession opens rather mischievously with Aret (Ifu Ennada) posting photos of her favorite actor in her bedroom with suspicious naughtiness. The story progresses and closely follows two couples – each with a sex deprived and workaholic spouse. In the relationship between Tricia Davis (Judith Audu) and Bayo Davis (Yemi Blaq), Tricia is the work obsessed wife while her husband (a famous actor) spends most of his time at home looking after their son. Tricia decides to get the assistance of a nanny in Aret (Ifu Ennada; who by the way passionately embodies her character) an obsessive fan of Bayo.

A jamboree of predictable events at best, end in Aret holding a gun to the Davis’s child when Bayo tries to end their affair and Kamar kidnapping the Umukoro’s son when Ene walks out of _their_ relationship.

The actors and actresses in this movie mostly gave stellar performances save for Judith Audu whose acting came off a bit unnatural and forced as she didn’t appear to wholly embody the role.

Although the movie starts off nicely with the writer critically examining each story arc with the eye of a watchmaker and paying attention to detail, the story changes halfway in shoddy fashion and appears as though the writer either ran out of ideas or abruptly upped and left the script, thus ending it on a flat note and leaving much to be imagined by the viewer.

This review was prepared by Daniel Akindayo

Previous Post 6 Reasons Why We Are Excited About The #FirstBankDigitalLab Launch!

Next Post Ramsey Nouah Reveals why Nollywood has failed to capture Herdsmen Attacks!