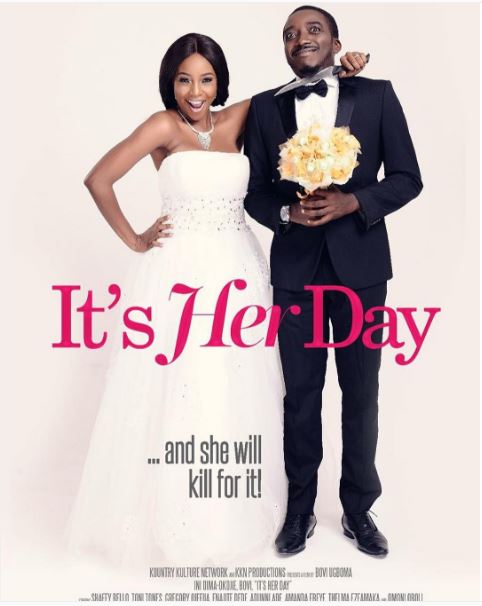 It’s her day is the story of an engaged couple, ready to walk down the aisle but Nicole (Ini-Dima Okojie) is obsessed with the idea of a flamboyant, talk of the town, front-page-news kind of wedding. Her idea of a wedding is one that breaks the bank. It had been her dream and it should meet up to her standards. She wants the perfect fairy-tale. Victor (Bovi Ugboma) her fiancé holds a different idea of what a wedding should be- it should be intimate.  But like the film is titled, ‘It’s her day’ and she wants what she wants. She wants Kelechi Amadi-Obi as the official photographer of the day. She cannot pick between Wizkid and Davido, she wants them both. She also wants Timi Dakolo. She cannot choose between Basket Mouth and Julius Agu, she wants the two top comedians to be at her wedding.

Nigerians love weddings. If you check all those bridal social media pages and their likes, you will understand the obsession with weddings. It does not help that every Saturday social media and the blogosphere bubbles with the latest bride in town from her entrance, to the gown, the bridal team and her make-up, everything makes the news so it is no surprise that Bovi takes inspiration from this and makes a satire.

The problem is, this film seems to blame women for putting the pressure to have the perfect wedding. They are the ones that want the expensive make-up; the show-stopping gowns; the top event planner and photographer. In this social media age, there is the obvious pressure to keep up with appearances, but for it to blame women, I disagree.

It’s her Day is beautifully written and has just the right wit to make its viewer laugh. Acting is commendable from Ini-Dima Okojie, she was great, and she played the cry baby that wants the perfect wedding, not the perfect marriage, backed up by her families support. Ini was one with her role, as no one comes to mind in delivering the same performance she gave us. When it comes to Bovi’s character, I didn’t get it, but, he was the fiancé under pressure, sometimes he came off as an absolute idiot but it was all part of the plot, as he appeared quiet smart when he was relating with his ex-girlfriend played by Omoni Oboli.

I am having a new level of respect for Toni Tones. Who has a supporting role but along with Shaffy Bello, they give a beautiful performance that proves that it is not all about playing the lead in films.

Music, styling, cinematography and the sound was great. Not all is perfect in this film though because it portrays women as obsessed with nothing but a flamboyant lifestyle, at least that is what Nichole and the women around her prove. Even Omoni’s character cannot save this stereotype. It is a good effort especially for a writing debut for Bovi.

It’s Her Day is rated 7/10 from Xplore. What do you think of the film, tell us in the comments section?