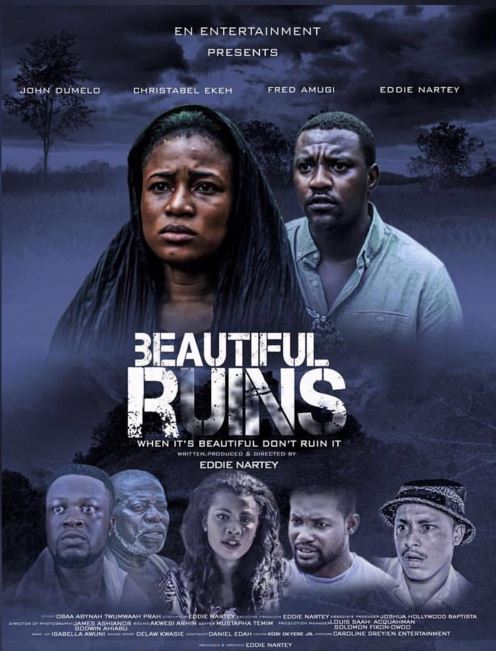 Have you ever wondered how people in the public eye live their lives? The constant struggle to live right, to behave right and to stay free of controversy, they are almost, always under scrutiny. Small mistakes can ruin all they have built for themselves.

Beautiful Ruins is the story of a successful actress, Abynay (Christabel Ekeh), she has helped her boyfriend, KK (Eddie Nartey) to become a director in the industry. With her influence, she was able to get producers to offer him a chance as a director. When he directs a new actress that impresses him, he strikes a conversation with her and when Abynay’s ‘gossip’ assistant sees them she reports to her boss, who in turn confronts her boyfriend by slapping him on set. In the evening, she tries calling, he ignores her, eager to know what is going on, she pays him a surprise visit and questions him, but she eventually sees the upcoming actress in his room with a towel. It leads to a wild confrontation and accidentally, she kills him leading to media frenzy, public judgement, and eventually, she spends six years in jail. When she is released, she tries to revive her career but the industry rejects her.

Her smoking habit that is introduced to us from the very first scene backfires and while struggling to revive her career, she falls ill and she has to relocate to the village. There she meets a crazed fan (John Dumelo), he really appreciates her work and with him, she finds new meaning and hope.

I am very selective about Ghanaian films because of the content and their use of vulgar language. I am mostly concerned with the works of Shirley Frimpong Manso. Admittedly, they have very good actors and when they are not adapting western films to the Ghanaian culture, they have really beautiful stories and this is one of the exceptional stories. This is a well-told story about anger, reputation, revenge and why we need to think over our decision before taking action because there are consequences. When Abynay first hears that her boyfriend is talking to an upcoming actress, her insecurity gets the better part of her. She wants to react to the news and she reacts too swiftly, she eventually kills him and her action also kills her career. It is a unique and original story; it balances soft humor and heartbreak.

Acting, was very beautiful in this film. It was in fact, the highlight of the whole film. Christabel Ekeh is pure gold. I’ve watched her in few productions and I’ve always appreciated her but I’ve never seen her as a lead and she does exceptionally well in Beautiful Ruins. She transforms from the bubbly, flamboyant actress we see in the first scene to the very depressed woman we meet later in the film. The beauty is that she balances this very well.

The cinematography and the sound were not too great but for a debut, Eddie Nartey does an incredible job. Some scenes are unnecessary but he picked the right story, not too complicated, yet very meaningful. He also picks the right actors and even though cinematographically they don’t win, they win in the other aspects of the film.

Xplore rates Beautiful Ruins with a 7/10.

Next Post Xplorenollywood Reviews; #TBT Movie – Journey To Self