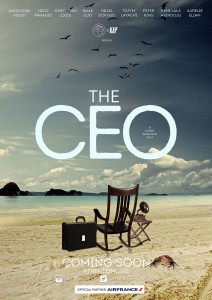 The 5th feature film of award-winning director Kunle Afolayan has been making rounds since the month of March 2016. It also made my anticipated movies to watch out for the year here. I had been looking forward to this and as luck would have it, I bought tickets to go see the premiere on Sunday the 10th of July.

While I didn’t enjoy the perks of VIP and VVIP, my ticket was regular, I was however pleased to be watching the movie. Set mainly on a beautiful beach resort on the outskirts of Lagos. “The CEO” is a mystery-thriller surrounding five top executives from across Africa who are dispatched on a 1-week leadership retreat by a multinational telecommunication firm, to determine which one to appoint as the firm’s new CEO. Things go awry when one –by-one the executives are eliminated in sudden death circumstances, and the finger falls on the last two remaining executives as prime suspects. As the threat of a possible death sentence for multiple homicide looms over them.

Let me just say, that I am glad that Kunle Afolayan takes risks, bring 5 people from across the continent who are actually from other countries and not using our people to fake accents was a good step cause filming is all about showcasing cultural diversity and the other dynamics that make our continent great.

Wale Ojo takes the lead as Kola Alabi, the nonchalant philanderer who acted like he was not interested in the role but what interested none the less. Wale delivered and I see an AMVCA nomination in his future, not just cause he spoke Chinese people, he delivered to his character and the expectations of this plot. Eloise and Yasmin played by Aurelie Eliam and Fatym Layachi respectively were equally good to watch on the screen. Their various languages spoken were impeccable and I enjoyed the way they struggled with the English language. This couldn’t have been forced or faked and was handled very well. Aurelie put up a good show with her fears and felt more comical than serious but appreciated.

Jomo played by Peter King felt like the weak link but what he brought to the table also contributed to the production. I particularly like Riikard played by Nico Panagio the no-nonsense, corky executive who wasn’t concerned about the others but the position of The CEO he was a natural and it would be good to see more collaborations with him in future. Angelique as Dr. Zimmerman was uncanny and reminded me of some of Agatha Christie’s character’s from her novels. CSP Ebenezer played by Hildo Dokubo wasn’t a favorite but she had her value, which she brought to the production table (FYI, shouting is not a form of intimidation).

I save the last spot for Kemi Lala and while I am closely following this act, I did not feel her completely in this role. She hardly had any lines, which usually depicts acts that play roles of a psychotic nature and had ulterior motives, but her size didn’t feel like she could pull off killing someone Jomo or over powering Riikard much less pull off an espionage plan, so I am on the fence with her role. However, I don’t see anyone the role could have suited better so that’s a plus to the casting director.

Production quality was pretty sharp with good shots based on the scenes. Sound quality was loopy, especially during Adekunle’s performance. That creepy sound from the suspense scenes were second to none as that eeriness that comes with those sounds came out for me.

For the script, Tunde Babalola and Kunle Afolayan have a match made in heaven as far as I am concerned. The psychotic thriller genre is one that hasn’t been fully explored by the industry and I like that Tunde Babalola brings this to bed. Not only was the script tight, the lines were well thought through and catchy.

The CEO is another masterpiece from Kunle Afolayan, his attention to detail and careful selection of his acts is unwavering not forgetting his choice for a production team.

The movie plays right up the psychology alley which I love and earns an 8.5/10 from Xplore.

Have you seen The CEO, tell me what you think about it, in the comments section.