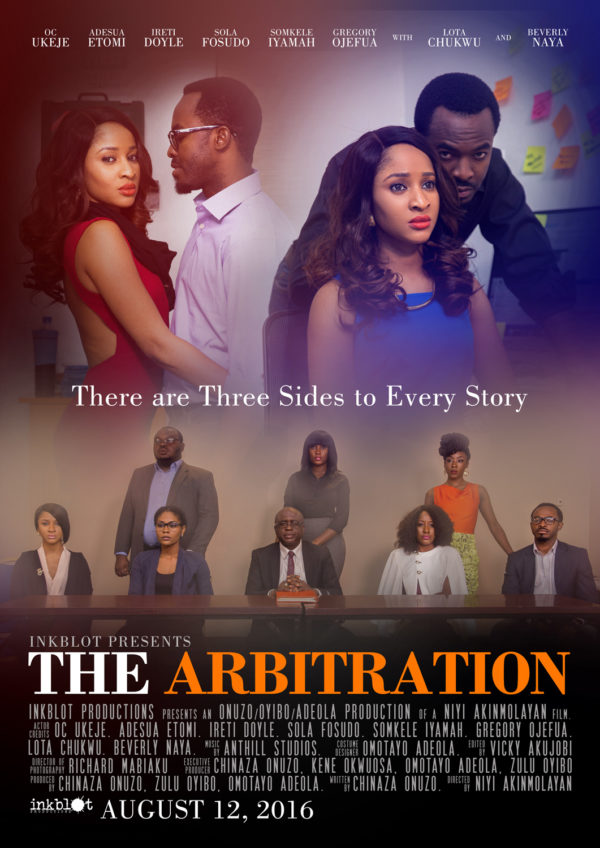 Working in to the FilmHouse cinema in Surulere not knowing what to expect from the movie “The Arbitration” is a feeling i am coming to terms with, as I have no idea what to expect from the Nigerian movies (they are doing great right?)! I settled in as the movie kicked off with the sonorous sound of Brymo and the bold words of “there being 3 sides to a story”. The opening scene got me nodding and thinking to myself, so this is how it all started.

“The Arbitration,” tells the story of Gbenga (O.C Ukeje) and his employee Dara (Adesua Etomi) who had an affair. After the affair ended and Dara left the company, she sued Gbenga and accused him of rape. An arbitration panel was constituted to find out the truth.

So let me get this off my chest, and probably off my moral horse, this movie is purely fiction, but the brazening way the affair was portrayed, irked me. I am all for overzealous goal getters trying to make a name for themselves but having an open affair with a married man in the same organization! Just felt like the struggle continues for us women and trying to prove ourselves that we can work hard without having to sleep our way to the top. That said, the plot was truly thick and well played.

Dara the little potty mouth played by Adesua Etomi, was brilliantly handled. She was hard working, intelligent, daring and very sharp. There was that serious drive to succeed that felt too much, but appreciable and different from the usual way female characters are portrayed in the industry.

Gbenga the self-acclaimed billionaire played by OC Ukeje seemed like he needed a boost in the romance department as his intimate scenes with Dara felt stiff. However, his role was well executed. One could feel his skimming nature, his frustration when he was losing and his greed to get revenge.

As for the lawyers of this flick played by Ireti Doyle and Somkele Idhalama, I doff my hat to the veteran Ireti, her corkiness got the best of her but rather than let it take over, she succumbed. Somkele the timid representative at first, seemed to grow in her role as a first-time arbitration lawyer with an ax to grind. It felt she had more to say at a time, but we were quickly brought to the aim of the film.

Makeup and costumes where a mighty plus for Dara looking really good in all she wore. It was a good reflection of her status which had power and confidence mixed into one, plus her bad-arse walk. The soundtrack was taken up a notch aligning with the scenes.

The script was awesome, all commendations to the writer Chinazo Onuzo who also wrote “The Department” coming from a man and representing some of the trials faced by women in high places, this was welcome.

Production quality was tight (people are seriously taking this to the next level) with sound and editing blending well to come through for the film. Didn’t get the camera angles though, panning behind and between the characters as well as the blurring of faces of characters when only 2 people are in the scene didn’t look well thought out but maybe is a new style introduced by Niyi Akinmolayan. Who asides the camera angles, also did a great job of harnessing the qualities of the acts together for this production.

The Arbitration is a fantastic production recommended for all and earns an  8/10 from Xplore.

Have you seen ‘The Arbitration? Tell me what you think in the comments section.

Next Post What is your Hustle? Africa Magic launches first of its kind ‘Dramedy’ series!