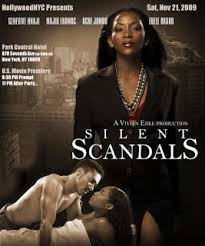 Jessie (Genevieve Nnaji) is a single mother, a career-oriented woman, and too uptight. Her daughter Ella (Chelsea Eze) is everything her mother does not want her to be, a shoplifter, a party freak, and has a boyfriend Naeto (Majid Micheal) who lives in the slums and does not help her be a better person. Jessie is facing a lot of pressure with her chosen career, because for her to campaign for a post with her party, she has to be married. Jessie has never been married. She had Ella at the tender age of 18 and trained her all through and for the first time she is facing pressure to get married. This leads her to have a contract marriage with her driver Naeto, who unknown to her, is her daughter’s boyfriend. She ends up in love and later pregnant. Jessie, Naeto and Ella end up in a scandalous web.

I loved this story, for one thing, its ability to feature even though slightly, the pressure women go through to get married. Jessie has to get married to be nominated by her party because if she is not, she would be seen as incompetent. Her success is ignored; she does not have a reputation. She would only have a reputation while married and because she is driven by her goals, she decides to fake a marriage with her driver, who is exhausted by her stuck-up attitude. This issue aside, we see a lot more in the story, the issue of abortion is brought up and at 38, Jessie faces a risk if she goes through an abortion. Not so sure how believable this is, it was probably an attempt by the writer to spice up the film and prolong the dilemma and it was quite unnecessary like so many other things we see in the plot.

Chelsea Eze was breath-taking in Silent Scandal. The very first scene of the film where we see her steal from her mother was really great. It was a picture of an unstable daughter and she portrayed it well. We saw her uncertainties. We saw her genuine interest for a change from the type of life she was living. She also looked perfect for the role she was playing, an eighteen-year-old that was full of troubles. She did really well in Silent Scandal and she remains the reason I looked for the film again. Majid Michael’s Pidgin English did not flow smoothly but he was able to portray the ghetto hustler quite well. Genevieve’s transformation is also fantastic; growing from the ice queen to the woman that also feels pain. Commendable!

Now cinematography and sound were not as great as the rest of the elements. While the picture quality was great in some scenes, in other scenes not so much, that could have been a post-production error but it was totally distracting, some scenes flowed beautifully, then it lost it at a point. Sound, level was very distracting. There were scenes that the actors were talking and what they were saying we could not hear because the use of music was used to overshadow some of the dialogue.

Silent Scandal gets a 6/10 from Xplore

Next Post 6 Most Anticipated Movies for the Rest of 2016