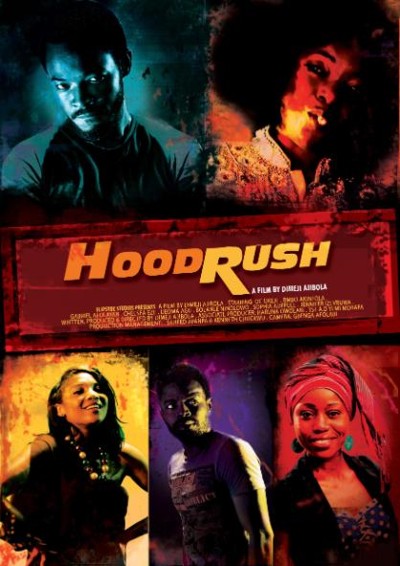 We all have big dreams, right? We all hope that our dreams will be reality and we hope for our one chance, our opportunity and most of us understand that the road to success is a grumpy and bumpy one. It is smooth only for few people and for most people, it is a struggle. Some will choose to get there if they find a shortcut; others will rather hold on to their morals and get there the right way. Hoodrush presents us with the harsh reality and sometimes painful sacrifices we would have to make to be success stories and if we choose to follow the easy road, the consequences are there.

Hoodrush follows two brothers Shez (O. C. Ukeji) and Tavia (Gabriel Afolayan), from a very poor background, struggling but blessed with the ability to sing beautifully. Like other dreamers, they hope to break barriers, to inspire, to become stars but the road to that is rough, as they learn through their struggle. They go through series of talent auditions, including a scam of a talent hunt. Shez eventually starts a financially sustaining relationship with Alhaja Kadisha, played excellently by Bimbo Akintola, but there is a disparity between true love and love for the sake of money and what Shez feels for Shakira (Chelsea Eze) is true love, it conflicts with what Alhaja had expected of him. His relationship with Alhaja comes with its consequences and Shez’s over ambition and the method he uses to make it a reality, soon catches up with him.

There are incredible actors in Hoodrush. O. C Ukeje is good in this and Bimbo Akintola does the exceptional job of being an onscreen cougar. Gabriel Afolayan happens to be the standout act, in this film. He is naïve, the kind of brother that wants to stick with his morals, he ends up facing most of the consequences of his brother’s action but what stands out in the film is his ability to handle this. Gabriel is one of the most underrated actors in Nollywood but it does not stop him from executing all his projects with such admirable professionalism.

While the storyline is great and the actors are commendable, the directing is where the problem comes from. It is a musical and the music is pre-recorded but it does not manage to send the shivers, the fire that an inspirational movie should send down our spine. It loses this due to the composition of actions and especially the music. There are problems with the sound of the movie in general and the way some scenes are set is just unrealistic. The music used is commendable.  The second to the last scene where Kelechi (Ijeoma Agu) tries to convince Tavia to go along with an audition, just seemed too much. I mean Gabriel Afolayan cries his eyes out for almost eight minutes of the film; it just goes on and on. The excessive tears from Gabriel Afolayan were overboard, we know he is heartbroken but heartbreak can be communicated with less. The way he ran to the audition hall was just over the top and when he finally gets to the audition room, the continuity personnel fails to deliver. We see the judges packing to go but all of a sudden they are sitting down, all this before Tavia even rushes in.

Directing, sound and continuity fail this film which should have been such a beautiful film, at the end of it all, it seems like a rushed project.

Hoodrush gets a 4/10 rating from Xplore.