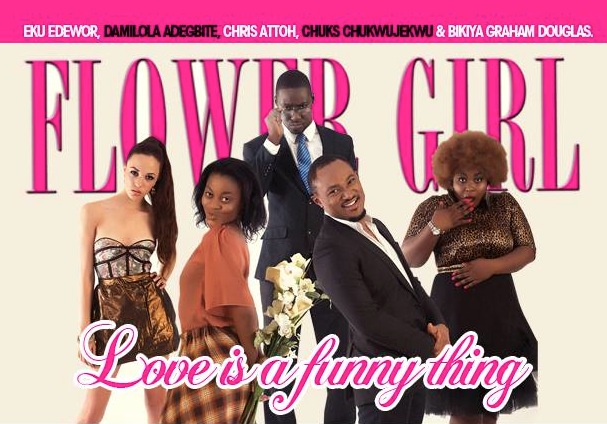 Plato in his criticism of art once said “Art is twice removed from reality”.

Two things come to mind when you relax to watch Michelle Bello’s Flower Girl. You are either angry at the stereotypical roles that female actors play, you could say it is twice removed from reality if you are ignorant of our society or you could choose to enjoy the rom-con as a work of art that serves to entertain and is quite truthful in its portrayal of ‘some‘ relationships in our present world. At the same time you could experience both anger and laughter because the film serves both emotions proportionately.

Flower Girl is a romantic comedy, the story revolves around Kemi (Damilola Adegbite) who is a florist and is in a relationship with Umar (played by Chris Attoh). Kemi plays the perfect role of the day dreamer, while Umar is more focused on getting his career forward. In fact, if he does not get a promotion at work, he would not propose to Kemi and because she has been waiting to get married all her life, she prays for his promotion because that’s what determines if she will get a ring. He eventually breaks up with her and then she meets Tunde.

The movie has its bits of interesting scenes especially with Kemi who comes off as quite childish and also her best friend Stella played by the energetic, flamboyant Bikiya Graham Douglas. It has its moments of excitement and also moments that are not so exciting. The writer, Jigi Bello, portrays the ladies in stereotypical roles; they are defined not by what they do but how they do it. Kemi is fascinated with weddings. She wants to get married. Throughout the film, Kemi is defined by her relationships. When she manages to pick up herself and concentrate on her career as a florist, Tunde returns to her and he proposes. So we never see her defined out of these relationships.

Stella is the noisemaker. Kemi’s best friend that cannot catch a break, she has a fashion sense and  a loud attitude that defines her through the film. She is more concerned about how she looks and who likes her outfit, another stereotypical representation by the writer. The other female character that has nothing to offer aside from beauty and her hunger for Tunde Kulani is Sapphire (played by Eku Edewor); she is an air head with a touch of class.  All the men in Flower Girl are defined by their ambition and will power to grow beyond what they are doing. Umar wants a promotion and Tunde wants to move from Nollywood to Hollywood. The women are defined only relating to the men.

The length of the film Flower Girl is just great. The film does not drag and neither is it too short. It could have done better with more aesthetically appealing scenes and edit those aspects  that added nothing to the film. For example, the scene where Kemi was unnecessarily acting up after her accident at Tunde Kulani’s home. The humorous chip in’s by the characters will keep you glued to your screen, especially those made by Stella, who the camera loves for her eccentric nature.

Talking about the camera, I noticed a few hitches with the camera angles, camera shots and camera movements. On so many occasions the cuts were rushed, you could feel the camera moving away as they followed a customer to the flower shop at the tail end of the film. It was not a smooth ride and did not communicate any effect at all to the viewer. Shots were replaced abruptly in so many scenes that is an editing problem that could have been handled better. The soundtrack was perfect until it was cut short. Efya’s “Best of Me” was the song of choice, and we hear it come alive in the scene Tunde and Kemi go shopping, the problem is that it is cut short abruptly. The soundtrack also gave us a few hints on what is to come, almost too early.

Flower Girl is a very relaxed film; you don’t see the effort from the beginning. The atmosphere is calm but it picks up later in the film and the conflict is resolved almost immediately. The movie had its ups and down moments. If you are a romantic that needs a bit of hope, Flower Girl is the film for you. If you don’t believe in the Prince Charming and Cinderella story, chances are that you will not feel too good after Flower Girl.

The movie earns a 5/10 and kicks off our #ThrowBackThursday Movie review.

Rejoice is a movie enthusiast. Art is inspiring, it makes us think and she believes it is the way forward. You can learn more about here – www.facebook.com/joicesamuelabutsa

Next Post The legal men and women in Suits are back!