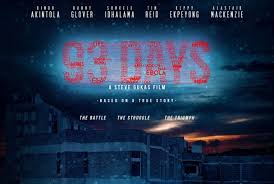 93 Days made my list of anticipated movies for 2016 as I followed its progress from the period Danny Glover was in Nigeria, to the family of the late Doctor’s incident to its premiere at the #TIFF 2016 and I was so caught up on this movie that I really wanted to see it.

Directed by Steve Gukas the gentleman that brought us ‘A Place in the Stars’,  93 Days tells the story of the 93-day period of our countries Ebola crisis. From when Sawyer comes in contact, with the men and women from our country as well as the WHO and MSF representative who do battle with this deadly disease. 93Days is a compelling human story of dedication, sacrifice, resilience and survival.

First off, 93 Days is a true life event, which happened to us here in Lagos. Not sure how many of us, will truly be that bold in the face of all the uncertainty about the disease and still stay committed to their job for the sake of containment? Well, the doctors and nurses of the First Consultant Hospital did and for that alone, they deserve a standing ovation and all the other accolades handed to them.

Bimbo Akintola reprises the role of the late Dr. Stella Adedevoh, who literally stopped Patrick Sawyer from walking out the hospital and boy did she do a brilliant job. She even had some small physical similarities with the Dr., Bimbo was resilient, putting her colleagues and subordinates before herself, refusing to do anything else including carrying out the test until she found a way to fight the disease gave me a good understanding and appreciation of the woman Stella Adedevoh.

Patrick Sawyer is played by veteran Keppy Ekpenyong and while I was irked by the accent which didn’t sound Liberian or American, one could sense Sawyer’s frustration and fear, which was well depicted by Keppy. The look in his eyes when he was informed that he had ebola by the doctor, showed that he knew all along something was wrong, but still went ahead to get on the plane and come to Nigeria.

Somkele played Dr. Ada one of the doctors of First Consultants to come out of remission and I loved to say she her performance was fantastic. The different stages she was going through could be felt, her disappointment that she might not be keeping her promise to her boyfriend and her words of encouragement to her other colleagues.

While Danny and the rest of cast did pretty well, I doff my hat to Alastair Mackenzie. Who played WHO representative Dr. David his lines were fluid, powerful, straight to the point and while it seemed like he was just doing his job, he was also impacting and saving lives.

The camera angles were well thought out, pinpointing our living conditions which could have been very detrimental if the disease was not contained. Props were on point, pulling footage from news stations, newspaper productions as well as the ebola checks. The soundtrack of this film will probably be the best for the year 2016. It depicted the fear, the gloom, and the eventual excitement when we defeated the disease in 93 days.

For the man of the moment and Director of the film, Steve Gukas, it was an honor to hear from him, having come from the Toronto screening. Gukas is positioning himself as the director whose focus is to showcase and celebrate the heroic people in our country using the art of film to achieve it and I could not have been any more excited for this movie. It was well thought out and greatly executed. Never have I watched a true life experience Nigerian movie and I hope we have more of this.

93 Days is an ode to the people of First Consultants Hospital and would help Nigerians appreciate and understand all that went on to contain the ebola disease and is still showing in a cinema near you.

Have you seen the movie 93 Days? Tell me what you think?