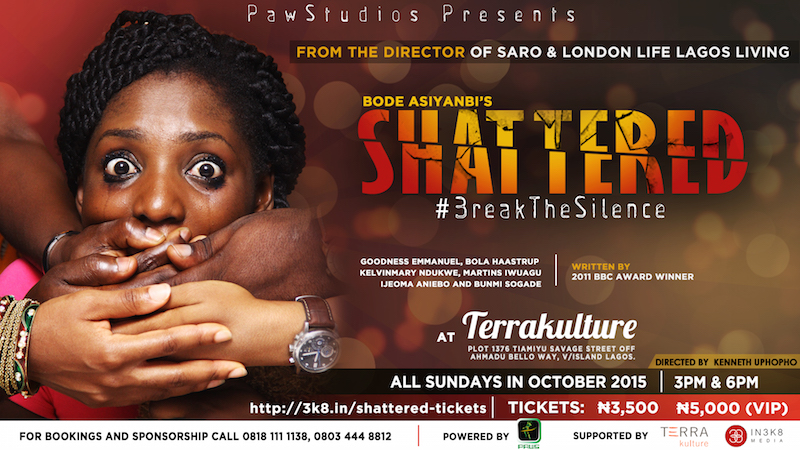 My sojourn to the theatre continued with a visit at Terra Kulture. Currently showing for the month of October, was Shattered a Bode Asiyanbi’s BBC award winning play which first premiered on stage at the British Council Lagos Theatre Festival in 2013.

This captivating story brought to life by PAW studios, focus on the ills of rape and the importance of reaching out in the most dynamic way possible. Loveth, arrives at the home of her benefactor Uncle Dave to collect her school fees which was due.  Little did she know that this day would be different than the others as her Uncle Dave extend his love for her a little too far.

The opening scene was kind of confusing as the screaming of the mother character felt like she was calling her maid and not her daughter, but what this did, was bring to the fore the kind of relationship that currently existed between mother and daughter.

While not being able to understand what’s is going on with her child who just attempted suicide, we see the mother turn to prayers, calling on family members and basically running helter skelter to get to the bottom of her daughter’s behavior. Why people feel that if they can’t handle anything the next place to visit is the church reigned supreme here, and a nerve was struck with the play.

The characters delivered well to their lines; turns out that every one of the female characters at a point in their life had been molested by either a relative or someone close to the family and every scene was true to them.

Dealing with the stigma and recognizing no one was above the law was an aspect the play also tried to address, the need to establish support groups and reach out centers for these victims is a must for us to be able to move forward in our county. The psychological effect also struck a nerve as the play progressed as someone in the crowd screamed ‘NO’ and another began to weep.

The production team put on a good show as the use of the space Terra had available was put to good use. I particular love the spread of the various props and the lighting.

Popular Play Director, Kenneth Uphopho from Saro the Musical fame and London Life, Lagos Living was on hand to guide the acts, he also did a wonderful job and was on hand to answer questions from the audience members.

Shattered is a must see for theatre enthusiast and earns a 6/10 from Xplore. It runs its final leg this Sunday 25th October at Terra Kulture at 3 & 6PM.