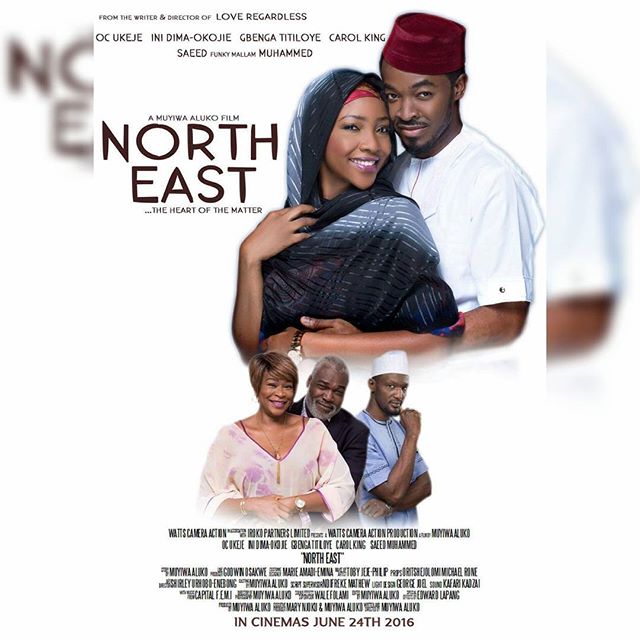 There are films that are not just here to entertain, they tell bigger stories. It is important for art to take inspiration from our present reality that is what North- East does, only problem is that it took inspiration from life without adding its own magic.

North-East is the story of an Igbo- Christian physiotherapist who falls in love with his Hausa patient. Coincidentally his mother is dating the father of the girl. That causes a serious opposition from the father of his girlfriend on the basis of religion and tribe, but is that why he is really against the relationship?

This is a very interesting storyline. Considering the situation we are faced with in the country, there are cases of ethnic discrimination here and there. It is difficult to see that inter-ethnic weddings take place, which is why the story in North-East is interesting; however, there is no need to keep dragging between similar storylines. Somehow, some writers in Nollywood follow the same old plot, if there is an opposition to lovers, then the guy has a girl his family wants him to marry or the girl has another man that her family wants her to get married to.  In North- East Hadiza’s father is trying to get her married to Aliyu, played by Funky Mallam, who has almost nothing to offer to the story aside a little humor. Another big problem with the script is that of the physiotherapist actually loving his dance class more than he does the hospital. There was no actual reference to justify why he preferred the dance studio; a short addition to the dialogue could have tackled this. The story is however quite interesting because it offers us a rare glimpse at what it means for Father and daughter to be in love with mother and son. That is quite different.

It is important that art takes inspiration from life because art influences life more than life even influences life and hopefully, the film ending in the unity of the two lovers would inspire more people to love despite their difference in ethnicity.

On acting, this is the first time I am seeing Ini Dima-Okojie in a lead role. Last year, I watched her on Desperate Housewives Africa, and her short-lived performance made me a fan and that was one of the reasons, I went to see North-East, it was refreshing to watch her again. O. C Ukeje was the lover boy again here; there was nothing different about his acting. I enjoy actors with the ability to re-emerge. The best performance comes from Gbenga Titiloye as Alhaji Musa, his ability to embrace the Northern character he plays in the film, made the film what it is. He was the opposition, it was important to see it and I saw it.

If I have noticed anything truly amazing by watching new movies this year, is the level of energy and talent put into the cinematography. I cannot say the same for North- East. It is especially really difficult to ignore the horrendous sound. The picture quality was not too great. It is film, it is visual, if anything else would not be great at least get the cinematography right. I would add that film producers should consider other choices of location. The film needed more depth in terms of locales, everything looked too familiar.

Previous Post Movie Sequels: To Make or Not to Make.

Next Post 2days to the FirstStars Reality TV Show Premiere!