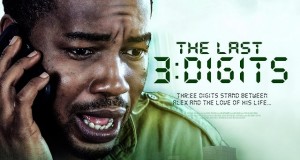 A young man finally makes a brief chance encounter with the love of his life, however she leaves in an untimely manner leaving him with a phone number short of the last three digits, his obsession with deciphering these numbers is a thrilling adventure.

Nonso Diobi takes on the role of the love-struck boyfriend who is desperately searching for the love of his life. Nonso as Alex handled his character well seeing  that he had tried all the numbers one could possibly think of and was still determined to try some more till he found his love. His expressions, fear, and excitement was totally apt and showed some improvement to his acting skills. His buddy and first time actor Sidney Esiri wasn’t too shabby. For a first timer and son of the late Justus Esiri, he held his own next to the veteran, he seemed shallow and lacking depth in some scenes but we can place that on his role in the overall plot.

Seeing Bimbo Manuel was pretty welcome, however, that French accent he tried to have was just cringe worthy and felt totally unnecessary. Audrey played by Padita Agu who co-produced this movie didn’t necessary have to star in it, as her role didn’t require anything out of the ordinary, while Yemi Blaq was just Yemi Blaq.

Let’s hand it to Moses Inwang for this film, as writer, director, and producer he deserves kudos for this out of the ordinary production.  It was not our usual, usual Nollywood film, wasn’t expected and depicts the extent one will go to find the one he loves or thinks he loves. He is one of those silent directors that give us something to look forward to once in a while and last 3 digits ticked the right boxes.

Have you seen ‘Last 3 Digits’? Tell me what you think in the comments section.

This review was posted first on www.naij.com