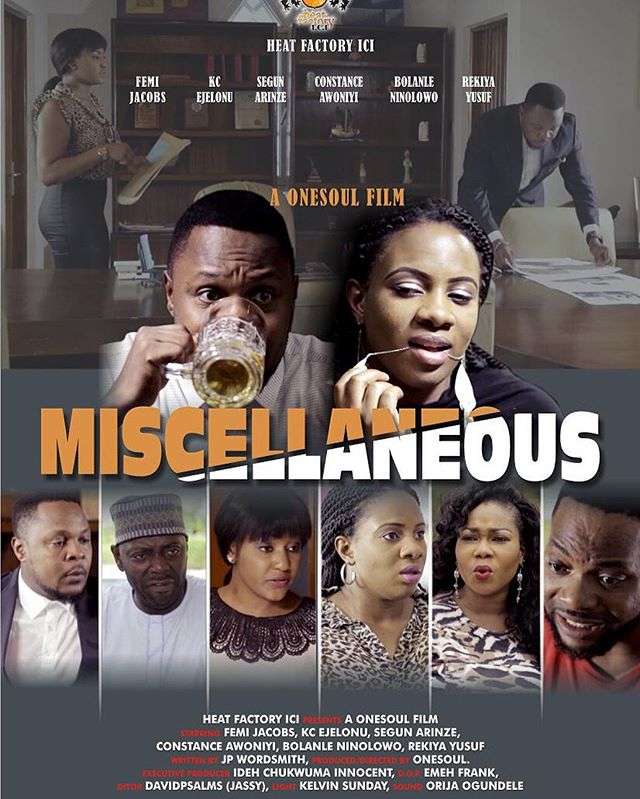 The word miscellaneous comes from the latin word misère, meaning to “mix”. It also means to gather items from different sources and director, One Soul uses this as the title of his film with Femi Jacobs as the lead.

Miscellaneous follows a man, who we can also say has an obsessive-compulsive disorder, he strives for perfection, everything has to be done well and by that, he writes what he has to do and places it in his kitchen, so that he can remember, he is very conscious of his environment. For example, he has a list of how his life should work out in ten years’ time, which is not a problem for anyone else, but is a problem for him because he expects nothing to interrupt this list. No 6 on the list is to meet a girl and get married and he wants to achieve that at 40.  When we meet him in Miscellaneous he is 30, he has no time for romance, just work. Things change on a night out, he meets a very heartbroken Loretta who flirts with him and it leads to a one night stand. You know how these stories go, she gets pregnant, she is confused and then they meet again and then end up together.

The one night stand story that leads to pregnancy in miscellaneous lacks depth not because it is a bad idea but that is the only thing the film has to offer, if you take away that you have nothing to keep the story. The story is slow, there is nothing more to the drama, and it is predictable from the beginning. The story is organised with no tension, there is nothing more to the story.

That being said, Femi Jacobs has proven time and time again to be on a lane of his own and it does not matter the story, he always gives his best and he does the same for this film as the lead actor. The pace of this movie is slow. The lead actress KC Ejelonu does not carry her role with the fire it deserves. The character the film tries to present her as and the character she gives us on-screen clash with each other. She has the good girl image but when she speaks, her words are vulgar. It does not work well. We see modesty but are we are fed with vulgarity. There was a lack of chemistry between the lead characters, even with the effort from Femi to establish this chemistry, it does not just work because the story lets him down and the lead actress does not make an effective companion on screen.

There are lots of moments in this film that left me underwhelmed but a surprise act in the film that has a supporting role and does really well is Constance Omowoyi. Of course, in films like this there are always friends that give advice and that is Constance’s job and somehow, she delivers her line with a sense of urgency and yet calm that makes her one of the highlights of the film.

If you love a hopeful romantic story, Miscellaneous will not give you this as the fire is none existent.

From Xplorenollywood, Miscellaneous gets 3/10 for the effort from Femi Jacobs.