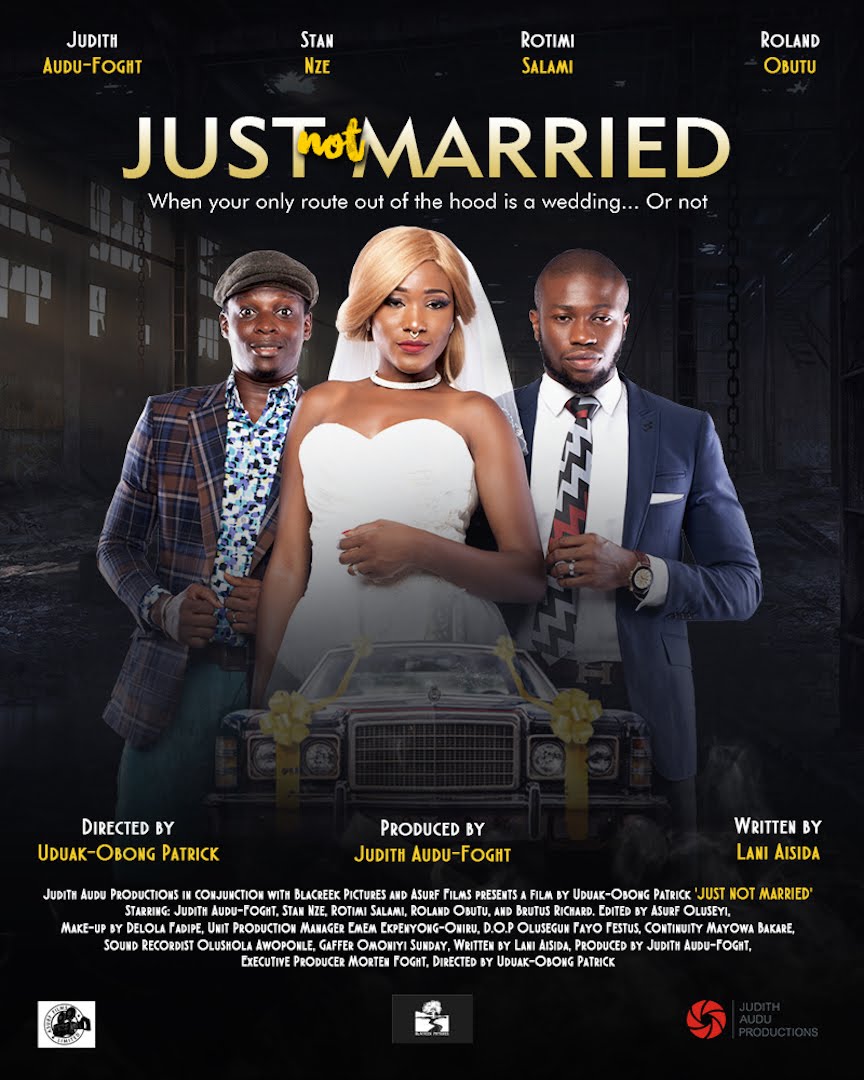 For me, Just Not Married came off as one of those movies I was glad I went out to see. The film follows the life of the character played by Stan Nze, his friends – Rotimi Salami and Judith Audu-Foght; his big brother – Roland Obutu, and his sick mom. With his big brother just freshly out of jail, a terribly ill mom and no money for drugs, he resorted to leaving school and stealing cars to raise cash. And with the help of his friends they stole by the dozens!

The entire length of the film keeps your eyes on the screen; the script editing was that good. Slow motion scenes, a variety of humorous side attractions, mother-son emotional episodes and a constant thought as to what was next kept it interesting. But why the mother died is still part of the script I don’t see a reason for. She now hated the jail-comeback first son and continuously warned the younger one to stay away from crime not knowing the younger one was already a crime mastermind. The humiliation the big brother suffered was well felt across the cinema seats, he got a day job and she wouldn’t even take money he offered her. Again the script writer fails but a little bit: With that level of despise from his mom he should have given the money to his younger brother to give to her.

Stan Nze’s performance leaves you sympathizing with him and finding common similarities with yourself. Judith Audu-Foght ,on the other hand was a bit too hyper. How can a lady be so excited during such car heists and ecstatic when she finally gets her share of the loot? It’s unnatural. Though her scenes were some of the best, she should at least have shed a tear for the dead mom na.

The movie’s lighting, cinematography, visual effects, and clarity were a lot better than most Nollywood films I’ve watched since Mo Abudu’s Fifty. The background music and sounds nailed it. No voices, just soundtracks with tempos and scenes in perfect sequence. I especially loved the highlife tunes. Rotimi Salami played a friend to Stan Nze, and he was a spendthrift par excellence. He plays a role typical to Tope Tedela’s friend in Out of Luck (2015) although Rotimi here plays a close friend that finally brings their Nemesis upon them. By the scene where he was talking his gang into one more week of operations before they pulled the curtains, a hitherto unpredictable script became what we could very accurately tell the next scene as the previously lackadaisical police suddenly sprang into action and regained their integrity by bringing the offenders to book. But while a predictable ending isn’t always a fabulous ending, Just Not Married ended nicely with the right amount of excitement for a really fine movie.

Camera angles were constantly impressive, locations and sets had no buts, BUT with the times we saw areas in Lekki, it’s safe to assume that YJ (the car buyer) lived there. There was a fat guy whose scenes had to find him eating or sleeping in a car park, always, and I think he’s a great example that the casting director did a great job. Costumes were great but the policeman at the first checkpoint wasn’t dressed for the role.

As they sold more cars the gangsters’ started looking better and Roland Obutu’s role as the big brother cannot be downplayed here as his palpable grief during news of the mother’s death almost made me drop a tear myself. The clear beating Stan Nze got from YJ (the car buyer) left him with enough makeup from Delola Fadipe to show a believable black eye and swollen mouth even though everything had disappeared in a few days without the sign of a bandage or stitch.

In a bid to end the drama, the movie turns into a twist of suspicion that leads to a violent end. I personally believe the suspicion was unnecessary in the face of good business. This film is a must watch for undergraduates and a call to the government for youth empowerment as some slums leave some kids with no options but crime.

Just not Married takes my movie of the month with a 9/10 rating. If you have seen the movie kindly share your comments, if you haven’t, see the trailer below.