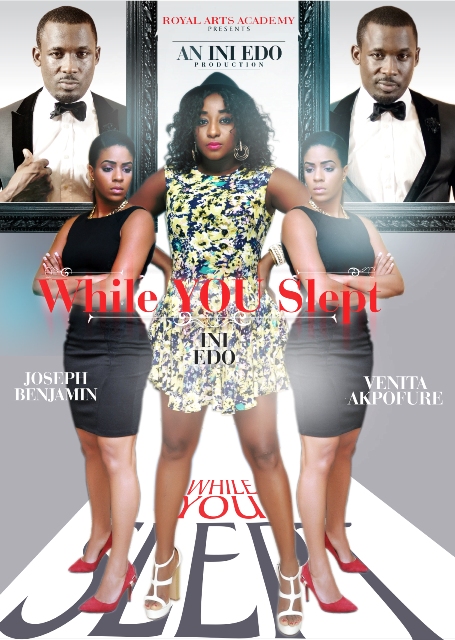 Shot in Lagos, ‘While You Slept’ is about Amaka Okoro whose life has been turned upside down when Najite, a mysterious stranger shows up claiming to be the secret wife of Emeka…Amaka’s late husband.

Ini Edo takes the lead in this 2015 movie and while my mind went to Sandra Bullock’s “While you were sleeping”, this movie in no way relates or ties to the foreign counterpart. How her character moved from grieving widow to psychotic killer was a great piece of work (I didn’t mean that in a good way) and could have only been pulled off by Ms. Edo.

Venita plays the unknown mistress while I’m not a sucker on her accent, sounds like she has a lisp problem, she does score points for her shadiness and coming up with the plan to take over an organisation she knew nothing about. Wasn’t it weird however how she settled in and already started giving orders? Only in Nollywood right?

Production was pretty weak with gremlins flowing left, right and center. Continuity needs to be beefed up as production crews have to ensure that all activities tie in nicely. The monologue scene was painful to watch while there were unnecessary scenes that the production could have edited out of the production.

From the plot, the script steamed like it knew where it was going. After a while, it spiraled out of control with a mental hospital scene, a getaway,  a break in and an eventual call out. *sigh*

While you slept reeked of a lack of research, production technics and a focused storyline.