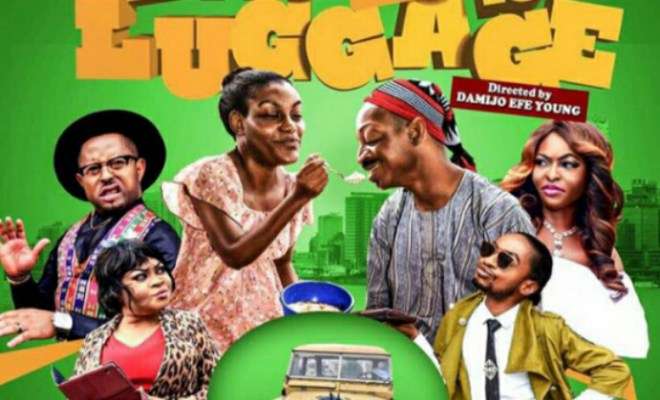 Excess Luggage combines comedy actress Queen Nwokoye as Ugonma, and IK Ogbonna as Enyinna, two illiterates, who have lived in the village for the majority of their lives, journeying to Canaanland to visit Eyinna’s fantastically rich cousin Douglas (Mike Ezurounye).

Douglas and his wife know every influential person there is to know; they have contacts to the Vice President, the Governor, and have a fantastic house to accompany the riches. They are also loaded with a number of servants, have little patience for misdemeanor, exorbitantly superficial, and usually hire and fire at will.

Excess Baggage has an intention to make its audience leave the cinema remembering elements of stupid actions that make up the film. There are many situations that make Enyinna and Ugonma’s stay in Canaanland interesting, including their lack of any idea of how to behave in affluence. It is interesting to see the writer has a scene with the pool and have the Enyinna’s compare it to the stream in the village where they wash clothes. They actually wash clothes and bath in the pool! The scene alone is enough to incite laughter, and is a memorable addition to the script. The script also invites dramatic Denrele for a shouting effect, which I found ridiculously unnecessary despite the attempt to compare lack of knowledge from the village, and the city.

Combining Queen Nwokoye and IK Ogbonna in a lead role should bring a lot of laughter to the cinema, and it does. Excess Luggage has a familiarity to what Mike Ezurounye did with the 2016 feature, “Brother Jekwu” but ‘Excess Luggage” provides more laughter than the latter.

IK Ogbonna has been making a lot of effort to withdraw himself from the stereotypical productions that fix him in roles of a young lover boy, and after his performance in “Showbiz,” he returns with this role that should catapult the difference he wants to be associated with. Queen Nwokoye makes her debut in the cinema, this distances her from the regular Asaba release format.

We cannot forecast the monetary capability of ‘Excess Luggage” in the cinema but on DVD and later on Africa Magic, the film has a lot of potential at going viral.

It earns a 6/10 from Xplorenollywood

Next Post Tuface Idibia makes an impressive appearance on an episode of “Professor Johnbull”!