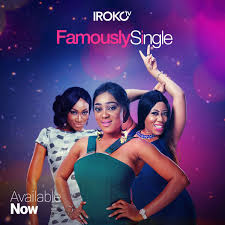 Nollywood has a history of dramatically shaming women and has created a culture of pressure. Single women above thirty or nearing thirty have been used as inspiration for shameful dramatic plots. The woman is either facing the consequences of prostituting or has chased every man because of her mean attitude. “Isoken” tried to break this stereotype, but we are here with another over flogged plot that takes inspiration from blackmail, prostitution, and mean attributes of a woman — at the center of it, is a mean female character, and even the supporting female characters offer no substance, one is dumb , the other is painfully subservient.

“Famously Single,” is another regular story line that is here to guilt trap a woman’s past.

Oma (Peggy Ovire) is influential and she defines a woman with an extreme queen bee persona. She claims to have made her money by being a fashion designer but we learn that prostitution earned her the riches. She builds a house for her elder sister and her husband (Seun Akindele and Oge Okoye), and continuously brags about it. When she falls in love and a man from her past shows up to complicate her life. She is forced into sex to cover her past, a sex tape is made and she suffers from anxiety as a result of the blackmail.

“Famously Single” lacks proper story development and intertwines a lot of ideas to make the film available to viewers. It is nothing fresh, nothing worth rushing to see. One moment, Oma is a mean girl but within seconds of meeting a man, the film promotes them as being in love. When Oma’s past comes to hunt her, instead of concentrate on her well being, she concentrates on hiding it from a man she falls in love with. “Famously Single” is an inconsistent story.

Posturing Seun Akindele as the lead on the preview is a fraud. The actor only makes few appearances. Moyo Lawal provides humor to what seems like an endless experience.

Famously Single was created to tug our emotions but it failed at connecting us with a story or the characters on screen.

Previous Post Check out 6 Films slated for Release This November!