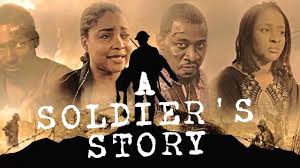 A Soldier Story produced by Martin Gbados is aimed at celebrating and encouraging Nigerian heroic soldiers and their contributions to the country. With an addition of a love story, the movie kicked off with a weird opening scene that couldn’t be placed.

Pushing boundaries is an expectation for acts and the cast of this production seemed to somewhat pull this off. Wasn’t sure of the accent or what country they were from but Linda as Regina the nurse put in a good show! She seemed to struggle with the accent especially with long lines as she was falling in and out of it.

First timer Zainab Balogun, didn’t do badly! Pretending to care, yet searching for an avenue to grab the man was epic! Boss-Man in the person of Daniel K Daniel (DKD) was committed to his role so much so he looked like the tyrant. I enjoyed his taunting and his games, the Russian roulette didn’t make sense, though, who puts another bullet in a gun when the game hadn’t truly started. But his AMVCA win was totally earned.

Sambasa as Ghetto reprised his role of cult member from the movie ‘A Mile from Home’, but this was a better production he also earned his AMVCA as the movie was made for him and he earned his best-supporting role award as well.

Tope is always welcome in his roles, but this role was different. A much taller character with broader shoulders should have been cast as he was pretty much a smaller character and looked like a scared cat and not a soldier,  medical or not. He had some fighting skills, but how does one manage to fight in such a small space, not break anything and not shooting the person lying on the bed.

It was good to see a fresh face in the person of Col. Bello aka Chukwuma Aligwekwe aka Chiko as head commander of the medical unit  and boss to Egar. He went on to convert his neighbors wife, he’s greed and jealousy came through perfectly.

Costumes & makeup- costumes fitted the roles okay! I fear for our military uniforms though as they seemed baggy and not as sharp as one would like. Makeup was gory in the right places, still needs a lot of work. Didn’t understand the bandage in the same places after 6months but hey!

The thought of a Soldier’s story was welcome, as no one truly covers the soldiers perspective or what they go through when they go to war. However, this didn’t add up! Did he help the country at the end or just help the poor people fend off the boss man! The script had  loads of lapses especially as it relates to military roles and the love story it was meant to have.

Production, as well as sound quality, seemed off especially at the waterfall scene. Camera angles worked pretty well as the shots helped compliment the scenes! Fighting scenes were a plus with the punches going in sync with the sound, this however, didn’t work for gun shooting scenes.

As mentioned, ‘Soldier’s Story’ was welcome, but with its lapses, all it managed to earn is 4.5/10.