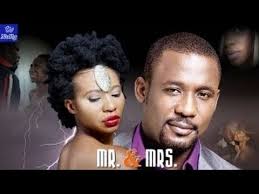 A few quick reasons why at a point Mr and Mrs was “almost” everyone’s favorite film.

Ken Abbah is married to Susan Abbah, a qualified lawyer, who chose to be a housewife instead of cracking nuts in the courtroom. Ken, who is from a wealthy home, sees his wealth as an opportunity to be mentally and verbally abusive to Susan, who takes his excesses just to keep a happy home.

There is also the “so-perfect” home of Susan’s close friend. Or is it perfect at all? Linda is the alpha female, she brings the money, she dictates the tone, Charles is almost dormant, and he feels neglected but never says a thing about it.

Chinwe Egwuagu is one reason why we need to advocate for more female film writers in Nollywood. For so many reasons, Chinwe captured the true reality of many women in our society. The woman usually has a big dream, she wants to live an incredible life, fulfilled in her career, in marriage and everything else but sometimes she lets herself go. The writer captures a true situation so easily.  It was essential that Chinwe created such a story of hope. We saw Susan Abbah.  She represents a lot of women in our society that have lost themselves to marriage. Yet in Susan, faith was restored, she liberates herself. These types of stories are rarely told. Linda also represents women who neglect their homes after careers. The message is that there is need for a balance, a balance that makes everyone happy. Most films tell us there is need to make the man happy.

What a difference Mr and Mrs makes!

Mr and Mrs was interesting because it embraced the traditional Nollywood film style by telling us a normal story, yet, it diverged by making a different story out of a normal story. That is what makes Mr and Mrs sensational. We also have the well-crafted dialogue and scenes that flowed perfectly.

The spectacular acting in Mr and Mrs is another reason why we saw a normal story that we didn’t think was normal at all. It is an all-around packaging of well organized, refined acting, especially from Nse- Ikpe Etim. I spent time thinking- “who could have been more fit for the role of Susan Abbah?” It is clear that the character was written with Nse in mind. Joseph Benjamin moves from the annoying oppressive man to the man everyone roots for and that is just beautiful. Sometimes you see an oppressor and they are always oppressors, even in a different film, we remember them as oppressors.  It was a breath of fresh air to see him metamorphose in the same film and do it perfectly. Barbara Soky was commendable as the intrusive mother-in-law. Thelma Okodua was excellent. It was an incredible casting.

One problem I had with Mr and Mrs is that at the end, it did not seem to manage the intention to tell two stories really well. When it finishes with the story of Ken and Susan, the story moves to Charles and Linda, these two stories could have been told interchangeably. It felt like one film finished and another started. In defense of the filmmakers, it was probably an attempt to make us concentrate on a particular couple then to the next but it did not give us enough space to celebrate Susan Abbah’s victory.

Something about the use of few characters, limited locations, and a very different lighting effect made this film look unique yet simple. Think about it again, it was the simple packaging magic that we were not used to but we didn’t even know we wanted. The film was treated like it was not a big deal, yet it was a big deal. Probably on your next outing ask at least seven people you meet if they have seen the film, chances are that five will say “yes” with a big smile and that is the effect of a job that put such a relaxed but hopeful effort into an incredible story.

From Xplore go watch Mr and Mrs, it is a timeless piece. This film gets an 8/10.