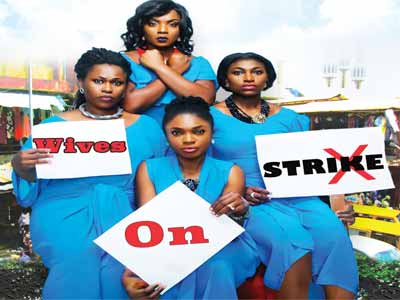 “Wives on Strike” is Omoni’s 3rd since debuting as a Nigerian movie director. While I’m an advocate of the industry, I’m not really an advocate of a movie a year and was kind of skeptical but still went ahead to see it.

Genesis Deluxe cinema wasn’t so bad to get too that Thursday evening, the crowd seemed okay and after watching a string of greatly produced trailers of Hollywood movies coming soon, our Nigerian movie kicked off.

‘Wives on Strike’, mirrors the lives of a group of market women who take it upon themselves to stand for a cause they truly believe in. From inception, the movie started driving home it’s social message, laced with humor, good acting and the simplest of lines.

Omoni in her role as Mama Ngozi settled in well. Her command of pidgin, her insistence of dragging people with her, but at the same time ensuring they wanted the same thing and eventually  championing the cause was good to watch.

Uche as Jumai who I understand was 4 months pregnant at the time also did justice to her character. Never really seen Uche in a comedy before or maybe I have, however, she stood her ground along with her friend. Ufuoma as the submissive and humble wife was quiet annoying and worked the script like a charm as that is what was expected of her.

Kenneth as Papa Ngozi brought his ‘A’ game and years of experience to this production. From the subtle yet stylish ways he tried to get his wife to ‘jangolover’, to his adamant refusal that his wife didn’t cause the other wives to do anything they didn’t want to do, Kenneth rose above his role and helped to give bother perspective to the movie. As Calistus, Julius was in his element, even as far as patronizing the women of the night, Julius was too frustrated to really care.

Chioma coming in at her time was well thought out and further drove the message and helped explain the role the government plays in the whole saga. Herself and Kalu have an existing chemistry and was well handled.

Production, quality in Omoni’s productions have been top notch and this was no different. Sound and picture were crisp and clear, without echoes, vibrations and the likes. However, aesthetics or should I say continuity still needs a lot of work,  from the local newscaster, the international newscaster,  the names of the stations and shows. Hmmm… Costumes on the other cast members could have been better and while I would like to say it might not have added anything, it was quite obvious that they weren’t properly planned for.

As the triple threat filmmaker (producer, writer, and director) I doff my hat for Ms. Oboli. Kudos on the initiative, It was well executed and the message was delivered clearly. As the writer, using film as a medium to drive home a strong message in a totally relatable way, as it pertains to the Federal laws, the place we as a people have in holding the government accountable as well as the rights of the child, I say, well done to you and your team.

My hope is that this project is picked and shown to different communities to understand the ills of the child bride.

From Xplorenollywood, the movie earns a 7/10.

Have u seen “Wives on Strike”,  share your thoughts below: