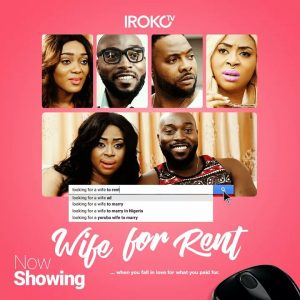 We have lost count of how many films we have seen with plot lines that involve hiring a man or a woman to pass off as a girlfriend or a boyfriend to parents or to friends. These stories want to capitalize on the obsession of marriage but they are getting out of hand. “Wife for Rent” is one of those films. The only difference is that this time, the man is not hiring a wife to show off to his parents but to get a promotion at work.

As a result of his single status, Debo (Seun Akindele) is unable to get a well-deserved promotion from his work place. His colleague lets him in on the secret of what it would take to get a promotion. His obsession and dedication for his work leads him to audition ladies to play the part of his wife. His sister Nike (Peggy Ovire) introduces him to a professional actress Ify (Mimi Orjiekwe) who is struggling to book more roles that could lead her to superstardom. Ify’s desperation for money makes her the perfect lead to play Debo’s wife.

We have watched several similar stories with films like “Hire a Man”, “The Intervention”, “Three is a Crowd” and many others, the problem is that very few of these films are creative. All plot lines are the same and at the end of each film the characters fall in love. There is a need for story tellers to intensify and provide better stories aside from what we get. There is a trend of following similar plot lines when a similar idea is successful and there is a need for change.

Mimi Orjiekwe plays the fake wife; at first she is colorful in a wild way. She wears blonde hair and is in love with an unstable artiste Max (Bolanle Ninalowo). Max cheats and everything is ruined.

Bolanle Ninalowo is impressive as the artist, Max. Mimi Orjiekwe’s accent gets confusing, but she fits well in her role because she is likable as an actor. She goes from a heartbroken woman to a happy woman and she plays each emotion excellently. Peggy Ovire is interesting in the supporting role as Nike. The film is there for entertainment and it does this by having really humorous dialogues for the lead actors. It also offers a story of love between Debo and Ify, we predict this from the first scene and it happens. “Wife For Rent” is enjoyable because it packs good actors but the story line is the last reason you would want to watch this.

Next Post MultiChoice Gives an Open Window for DStv Compact & Compact Plus Subscribers!