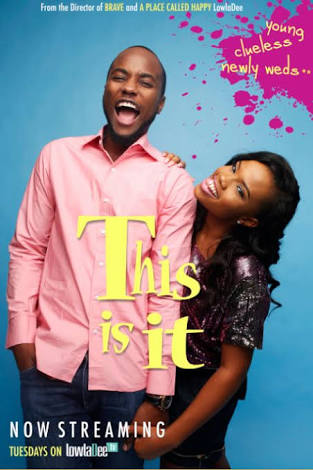 I am an absolute fan girl of Lola Dee’s “This is It”. I recommended the first season to many to my friends. I watched it so many times. “This is It,” was a subtle exploration of a young couple’s marriage. At 22 Dede is married to Tomide. Together they navigate the marital life, their friends and a few outsiders that threaten their union.

I have been waiting for more episodes since January and I am glad that the show will be back on the 26th September. I absolutely trust Lola Dee’s creative direction, but I also have daydreams of how I want the second season to look like.

1. More Action from Dede and Tomide: So the last season of “This is It” ended with Dede getting a new job, which requires she travels to another city for training before resuming. This situation was unsettled before the end of the previous season. My bet is that Dede will forfeit this job, but there should be more drama in the new season. Dede and Tomide are the super cool young couple; they do not argue for too long, or fight for too long. It is why we adore them. The subtlety of “This is It” made it worthy of admiration, but I expect more action from Season 2 and I would love if Dede takes the job. It is what can set the second season for wild drama.

2. A Major Threat to Dede and Tomide’s Relationship: In the first season, an admirer threatens Tomide and Dede’s relationship. From Dede’s side, a colleague gets attracted to Dede, and on Tomide’s side the threat is deeper. That admirer is the sultry Nancy Isime, she did not succeed but what if Lola Dee decides to stretch the side chick story, maybe, introduce a new threat? The new season features Ozzy Agu and I am thinking what if Dede and Ozzy’s character have something? Or what are the chances of Tomide and Linda Osifo’s character or even Jemima Osunde…? Quite scary but still exciting.

4. More Characters that help evolve the story: More actors have been hired for the next season but what will they be doing? Just when we thought we were done with Asa’ah Samuel’s character, he returns on the cast list. We hope he finds his own girlfriend and leaves the group alone, but here are all the cast members to expect for the new season. I am hyped to see Ozzy Agu, Bukola Oladipupo, Teni Aladese, Chisom Ofor, Olumide Oworu, Joyce Maina, Linda Osifo, Ben Touitou, Kunle Coker, Tosan Ugbeye and Jemima Osunde

Next Post Movie Review: In “Uncloaked” a Gay Man is Severely Depressed