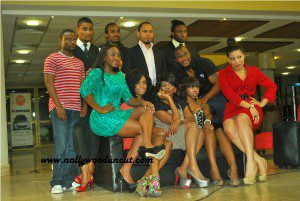 This star studded flick, comes to us from the stables of Royal Arts Academy( still trying to figure out what they are about). I was a bit skeptical of the movie at first, as films filled with a lot of notable characters most times turn out to be a farce and not as fantastic.

Not wanting to let the cat out of the bag, regarding who played what, I will leave that to you guys to figure it out (due to the fact that it was a host of peeps, I don’t want to spend my space talking about only the characters). I will say,  that this was one of the best casts every produced but, Ini Edo cannot be a successful house keeper with the sort of nails she had on,  Booby Obodo’s use of a set of cutleries is appalling, especially since he was meant to be well to do. I was extremely glad for Uti’s role, where he didn’t have to scream at all,  but his scene with Genevieve which was supposed to be smart, witty, sarcastic and sensual lacked the intensity of acts like jinx and bond  or Mr. & Mrs. Smith secret service agents (spies whichever suits you) with an eye on the prize.  I didn’t feel Ramsey brought his game to his role but it was nice to see him after a long while and  I couldn’t get over the comedic nature of Alex Ekubo, he deserves a thumbs up for his role which is his basic character most times.

Desmond brought his ‘A’ game in directing, fading into scenes was precise,  no long transition, just short and sharp. Most of the stories were good, but a few of them were just there and not needed. With so much going on he does a good job of threading the stories together, they are all linked in one way or another. I still have a problem with telephone conversations and not seeing or knowing if there is another character on the line, it totally lacks believability (lets not forget that there was a whole movie on just a telephone call) I loved the subtle promotion of the hotel and the richness of Akwa Ibom, I believe this is a step in the right direction and other states and cultures can be explored to drive our heritage, cultural identity and tourism.

Weekend Getaway is a tale of sorts, comprising of comedy, romance, drama and a little bit of action. A couple of surprising lines but there were also predictable ones. The older actors stood out but I believe the younger one’s also did a great job of depicting their various characters. I see an action movie in the works, with the kind of packs our Nollywood hunks have.

The movie ended up being cute and kind of funny, it is worth the watch and gets an A from me.
No votes yet.
Please wait...