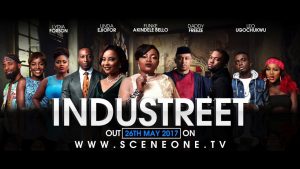 Industreet, an upcoming TV Series focusing on survival in the entertainment industry, will be released on the 26th of May, 2017. The TV series will debut and stream exclusively on Funke Akindele’s Sceneone TV (sceneone.tv). The app may also be downloaded on the Apple App Store or the Google Play Store for mobile viewers.

According to the multiple award winning filmmaker – Funke Akindele, “It (Industreet) is just a group of people coming together to do something different on television through Scene One Productions…My mission is for people to enjoy wholesome entertainment.”

Funke Akindele is known for hit films like Maami, Jenifa, A Trip to Jamaica, Jenifa’s Diary and the much anticipated Isoken by Jade Osiberu. Industreet is set and said to be the new sensation to rock the airwaves. Take a peek at the trailer.