Lupita Nyong’o and Winston Duke are reuniting to feature in Jordan Peele’s  “Us”, after co-starring in Blank Panther, released in February 2018.  The feature follows Jordan Peele’s “Get Out”, a horror film about race division in America. 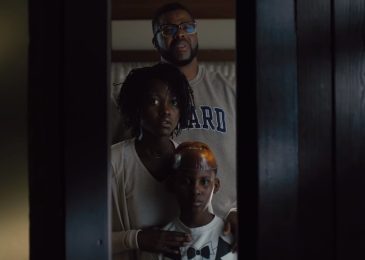 Us is about a black family — a mother, father, son and daughter travel to a beachside home in Northern California where they are spending the summer. Gabe (Winston Duke) is the father and  Adelaide (Lupita Nyong’o) is the mother.

They take in the day lounging at the beach with some old friends —the Tyler family (Elisabeth Moss and Tim Heidecker). Their blissful day quickly turns sinister when Adelaide —who is haunted by a past trauma — notices that her son Jason (Alex) is no longer on the beach. Adelaide spirals into a panic running along the sand shouting for her son before finally finding Jason who —seems OK, though perhaps a little thrown off by an eerie figure he sees on the beach. Done with the beach for the day, the Wilsons head back to their summer home for the evening. As night swoops in, the family’s lives descends into complete chaos. First, a figure clutching a large pair of shears appears in their driveway along with four silent figures clutching hands.

Never one to back down from a fight Gabe (Duke), dressed in a Howard University sweatshirt and clutching a baseball bat, runs out of the house to confront the figures who are terrifying his family. He screams, “If you want to get crazy, we can get crazy!” As he approaches them, he realizes there is something oddly familiar about these monsters. What Gabe sees stuns him —the Tethered are horrific versions of himself and his family. Though the figures are shrouded in darkness, Adelaide soon realizes, “They think like us, look like us, and know who we are.” Terrorized and panicked, the Wilsons and their friends begin the bloody and horrific fight for their lives.

Previous Post Zainab Balogun says role in “God Calling” is the most significant of her career!