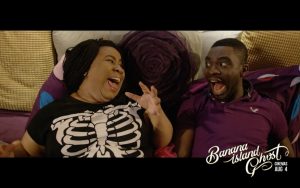 Written and directed by BB Sasore, Banana Island Ghost is a one of kind movie set to combine comedy and action. The movie which would be in theaters by the 4th of August, 2017, is a collaboration between Biola Alabi Media (Bukas and Joints) and Nemsia Pictures (Before 30). The official trailer was unveiled at the IMAX Cinemas on the 16th of May, 2017, with the cast and crew present.

According to BB Sasore (the writer-director), “Embarking on feature film projects has always been on our agenda, and when the opportunity with Mrs. Biola Alabi (co-producer) came up, we were certain it was the right step to take.” This is the first feature film which sees Chioma Omeruah (Road to Yesterday) and Patrick Diabuah (93 Days) take lead roles.

Patrick Diabuah plays the ghost who gets scared on his way to heaven. He desires a soulmate and so convinces God to give him three days to return and fall in love. He’s paired with Ijeoma (Chigurl), a cranky personality trying to save her father’s house in Banana Island from the bank. The two of them must survive each other, learn to work together, and eventually fall in love to see their destinies unfold.

The film is expected to be a cinema favorite upon it’s release.