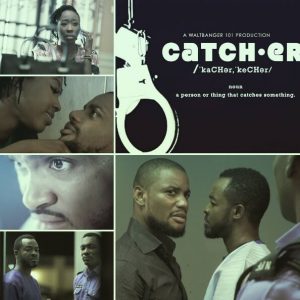 Catch.er is the first feature directed by Walter Banger since his 2015 crime thriller – Gbomo Gbomo Express.
The new movie would have it’s world premiere in Paris, on the closing night of this year’s Nollywood Week Film Festival, on the 14th of May 2017. NollywoodWeek is a yearly film festival that showcases the best of the Nigerian film industry with the aim of finding a larger audience and more sustainable distribution system for these quality films.

Synopsis: The film tells of an ambitious career woman who is found murdered on her wedding anniversary. Her husband becomes a prime suspect along with others in her life who may have had a strong motive.

Walter Banger is popular for productions such as The Apprentice Africa, Vodafone’s Icons Ghana, Amstel Malta Box Office and Sprite Triple Slam. He wrote the original screenplay and co-produced the Independent feature film Get Lucky (2013) produced by Gateway Films (UK) and Atlas Independent (US), and distributed by Universal. His film The Wages, which he co-wrote, produced and directed, won the Best Short Film category at the 2014 Africa Magic Viewers Choice Awards.

His last movie Gbomo Gbomo Express was a mix of comedy and crime, centered around the kidnapping of record label boss (Ramsey Nouah) and a beautiful socialite (Osas Ighodaro). His other works include Half Empty Half Full and Married To The Game (in partnership with EbonyLife TV).

Catch the trailer for Catch.er here.

Previous Post Jade Osiberu’s “Isoken” is on our radar for all the right reasons!

Next Post Stanlee Ohikhuare’s “Behind The Wheels” Gets Release Date