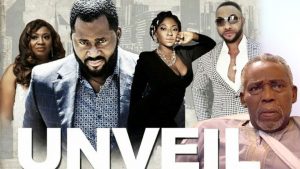 Vivian Williams will be debuting her feature film, Unveil, across Nigerian cinemas on the 12th of May, 2017. The film which premiered in Calgary on the 4th of March, 2017, has been described as suspense-filled and “gbedulicious”.

The drama follows an ambitious young woman (Meg) who left Nigeria in search of a better life in North America. After several years of hard work, she decides to return to Nigeria in hopes of reconnecting with her family but instead loses everything. Now she has to  fight to get her life back. Like Lani Aisida and the Plus 234 series, this film is an adaptation from the writer’s personal experience.

Unveil was written by Vivian Williams and directed by Robert Peters. Roberts is a producer, cinematographer and actor best known for directing the 2014 Nollywood breakout movie 30 Days in Atlanta. The comedy featured in the 2017 Guinness book of records as one of the highest box office earners. The director also won the awards for the Best Director and Best Film (both for Affairs of the Heart) at the 2015 Golden Icon Academy Movie Awards (GIAMA) and the Nollywood and African Film Critics Awards.

Previous Post Movie Review: ‘The Screenplay’ is a daring film…