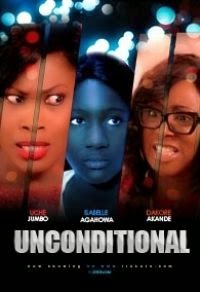 Unconditional a movie from Uche Jumbo Studios mirrors the extent to which a mother will go to fight for her child. Gina’s (played by Uche Jombo) 8-month-old child was stolen. 11 years later and after an unsuccessful search, her 15-year-old daughter Isabella is shocked to see herself on TV as the mathematics challenge winner but she is called Amanda Peters. Mrs. Peters (played by Dakore Akande) claims she has adoption papers for Amanda Peters but Gina never gave her child up for adoption.

Ikechukwu Onyeka brings us yet another mellow-drama were I secretly wish there is a twist in the plot that
will leave me wondering how they pulled it off, but alas, if wishes were horses. A relatively small cast means easy to manage and tighter scenes right, but for some reason, the whole production felt mundane and with nothing special
to it. Set in what I believed to be 1999, Gina loses one of her twin daughters to kidnapers, after a very futile
search (4 weeks to be exact) she gives up and obviously moves on. Fast-forward 15 years (that’s what the movie states) and her 11 year old twin sees her look alike on TV announced as winner of a mathematical competition (stop me whenever you like please). I feel extremely weary when I see years later in our movies as consistency and continuity takes a nose dive in most of the productions.
Uche Jumbo plays Gina and while I commend her for being very hardworking and taking the reins in the industry I am completely bothered that what I see is the same ol’ same ol’ in her movies. Screaming, mouths arced in a certain
position, blinking eyes, waving hands and the lines that don’t provoke a thought or an emotion in anyone. Might I add, Gina, cannot and I repeat cannot look the same as she did 15years ago, please ‘make-up artist take note! A
change of weave-on doesn’t mean a change of almost 15years, not realistic at all.
Haven’t seen Dakore in any movie recently so it felt like a breath of fresh air to see her here, however, this role wasn’t the right one to see her. For a mother who had been swindled by an adoption agency, it just felt like she would have been more broken at the thought of losing her child as against just visiting the agency and getting
a  tongue lashing from the proprietor. Furthermore, she had committed a crime, swindled or not, the manner with which she adopted the child wasn’t the proper means, so I struggled with how she doesn’t get community service, some jail time for her crime or even Gina’s character giving her a shake down and making things unbearable, com’on its your child, not a trophy.
While Lepacious Bose is making her rounds in the industry, from Being Mrs. Elliot and now this, I would like to say that, before she gets sucked into roles, she needs to check out the roles she been offered and ensure she’s picking career enhancing roles. For this movie, her role was overly exaggerated if there is anything like that. Giving us scenes about her home life and the way she maltreats her husband did nothing to show she ran a responsible
Adoption agency, if for anything it was a great disservice. But did she handle it well, she sure did, does she want to be type-casted into those roles? Then she should choose wisely for 2015.
Regarding the new entrant Isabella Aghahowa who plays dual roles, one word, acting classes! Our kids look stock-up in roles and lines don’t seem to flow. Playing the role of a twin is hard as she is supposed to be talking to herself, but the scene where she was actually doing so, which is like a climax of the movie was hard to watch and left a sore taste in my mouth.
Uche also takes the reins in the scripting department sharing it with Folake Amanfo (Lies Men Tell, False) and I must say, it didn’t add up. It wasn’t tight as it had certain aspects thrown around. What was the aim or would I say goal of this movie, to entertain or to point out our degrading security and criminal justice problems or just a
mother’s unconditional love? Whatever it was, it was completely lost in this story. Some scenes were totally unnecessary and didn’t add to the overall plot. Prison scene (which was virtually impaired), story of the kidnappers,
Olajumobi’s scenes with her husband and then a divorce sef (we are getting wiser oh!). While those aspects where a letdown, production quality was clean, with clear shots, while sound quality was equally good.
In the face of all its shortcomings, Unconditional was another Nollywood production with an unrealistic plot and goofy continuity. It earns a 3.5/10 from Xplore
No votes yet.
Please wait...
Voting is currently disabled, data maintenance in progress.

Next Post This Valentine, iROKOtv.com premieres 30 Days in Atlanta, Poisoned Bait, Husbands of Lagos and More!