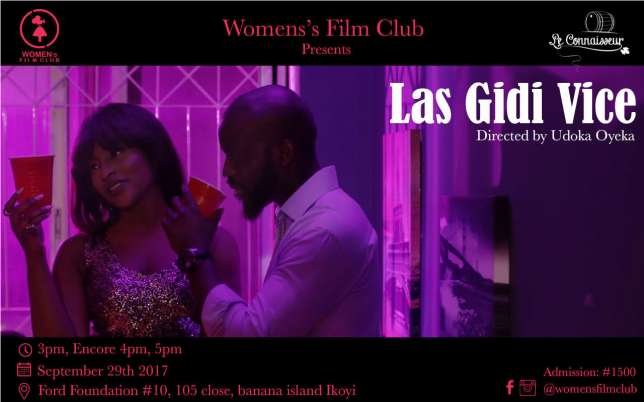 Maybe you know him as Tinsel’s Sav. Or you might have watched him on the entertaining web series “5ive,” where he plays Osagie, the tormenting husband that ends up with a dose of his own medicine. He also replaced Gideon Okeke on “When Love Happens Too,” and made a splash in a cameo scene, in “The Department.” Udoka Onyeka is a sizzling actor, as much as he is a director. He is making slow but giant moves in Nollywood by directing short but notable films that spark important conversations, and this time, he has slated “Las Gidi Vice,” his new short film for release.

The film had its premiere on the 29th of September at the Women film club, and will be released soon online.

The short film, directed by Udoka Oyeka, follows a playboy’s fun night out as it turns adventurous when he meets a girl he’ll never forget. It features a host of upcoming actors, and we will definitely bring you a review once it is available online. Udoka’s last outing as a director is “No Good Turn,” which was critically hailed for daring to start a conversation on the sensitive message of terrorism and compassion.

We are eager to see Onyeka take up a feature length, but we are also patient to enjoy his work on shorts.