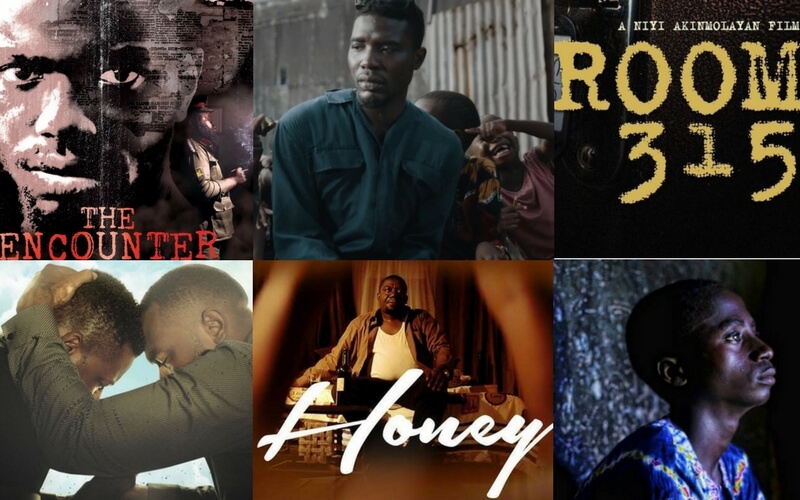 The sleuth of short films has only just begun. The attraction in these productions lie in their straightforwardness and the inspiration they bring. Some, like Closed and Bariga Sugar, would leave strong impressions long after their ended. These short films have been tested OK to be worth your time. Check out the top 7 below.

7. To Be A Child Again
Directed by Diji Aderogba (Victim), this film explores the need for education among the less privileged. One thing to take from Aderogba’s films are the soulful soundtracks and how he takes on social issues. His plots are clear and his visuals are breathtaking.
Watch the video here.

6. Room 315
Directed by Niyi Akinmolayan (The Arbitration), the film follows a day in the life of a therapist (Bob Manuel). His customers range from the old to the young and the secrets they share with him, plus how life holds the four of them, including himself, in one intricate web, all combine to make this a must watch.
Watch the video here.

5. Honey
This 2016 Real Time festival selection takes on child prostitution and the results of absent parental supervision. Written and directed by Oluyomi Ososanya (Reciprocity), Honey employs a matching soundtrack with for the unfolding events in a young girl’s life. There’s a lot of appreciable cinematography in here.
Watch the video here.

4. The Encounter
Directed by Tolu Ajayi, the film is based on a story by Henry Onyema set in the Nigeria-Biafra civil war. An imprisoned Emmanuel Ifeajuna (Amara Onoh) is summoned by the Biafran Commander-in-Chief (Greg Ojefua) for one last conversation. In The Encounter, camera angles and filming locations were dope, not leaving out the military costumes.
Watch the video here.

3. Hell or High Water
Directed by Asurf Oluseyi (Hakkunde), the film starts off by placing Assistant-Pastor Jinadu (Eyinaya Nwigwe) in our good books. Just when we think he’s the saintliest man on earth, we’re introduced to his homosexuality. It’s difficult to immediately want to chastise him given we’ve already come a long way loving him. We can only recline as all hell breaks loose around him.
Watch the video here.

2. Bariga Sugar
The film centers on Ese, a reclusive 8 year old girl living in Bariga Sugar – a ghetto brothel in Bariga, Lagos. Her mother Tina is one of Bariga Sugar’s working women. 10 year old Jamil and his mother Hanatu move into the brothel as Ese and Jamil begin an unlikely friendship. Directed by Ifeoma Chukwuogo, Bariga Sugar brings the surprise when you’d least expect it.
Watch the video here.
https://www.youtube.com/watch?v=MV5qmR_1YUk

1. Closed
This film explores the need for education and goes further to show the trans-formative repercussions it can bring. It centers on Juwon, an illiterate mechanic who finds new meaning when he joins a class of pupils far younger than he was. Directed by Tolu Ajayi (The Encounter), Closed is bound to leave you good spirits.
Watch the video here.

(Bonus Short Film) Hanatu
Produced and directed by ace film maker, Kunle Afolayan (The CEO), this Sahara Foundation inspired short film which tells the story of how a young corps member named Preye helps a little girl (Hanatu) in a village rediscover her confidence and hope for a bright future when he helps her secure a prosthetic leg following a dastardly accident which claimed her father’s life. The Sahara Foundation ads could have been more creatively woven into the film than the slideshow that ruined my experience.
Watch the video here.

Do you have other exciting short films I may have been missed, kindly share them in the comments.