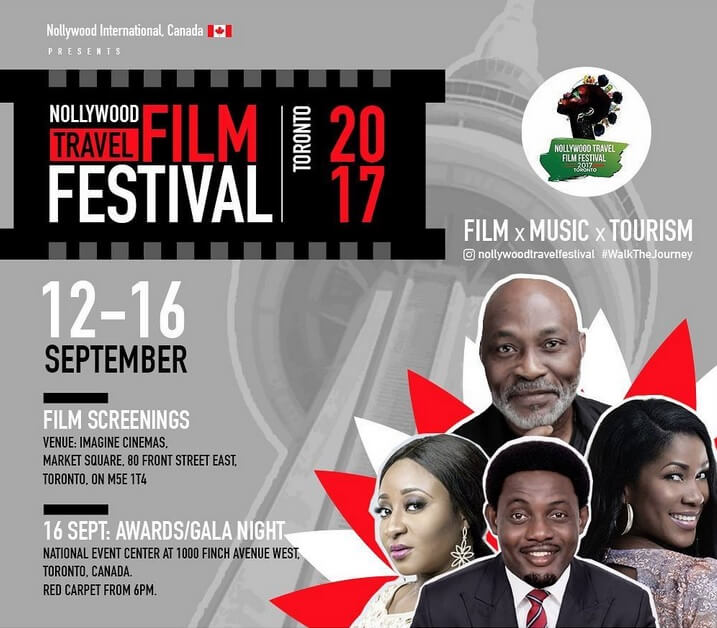 The maiden edition of the Nollywood Travel Film Festival will hold at Imagine Cinemas (Market Square, 80 Front Street) and the National Event Center in Toronto from the 12th – 16th of September, 2017. The festival is an initiative that seeks to promote films by Nigerians living all over the world to new and existing global audiences.

The opening film will be Kada River, a romantic drama directed by Toka McBaror (Ikogosi: The Last Turn on the Left) and sponsored by the Big Church Foundation. Starring Joke Silva and Chris Okagbue (Hush – Series), the film centers on two lovebirds in the middle of an age-long tribal rivalry. The director also has his hugely talked about Lotanna (starring Joseph Benjamin and Bimbo Manuel) on the screening list. The films nominated to screen at the festival are:

Kada River (opening film)
Director: Toka McBaror
Synopsis: In the midst of an age long rivalry between two warring towns, Jerome and Nadia hold on to their young love in a bid to restore peace and save their tribes from an age-long hate and rivalry.

Unveil
Director: Robert Peters
Synopsis: An ambitious young woman leaves Nigeria in search of a better life in North America. After several years of hard work, she decides to return to Nigeria in hopes of reconnecting with her family but instead loses everything. Now she has to fight to get her life back.

Lost in London
Director: Sunkanmi Adebayo
Synopsis: When Okon and Bona meet in London, the result is a hilarious comedy. They’ve been selected for an exchange program in London, but will they return home after the program or will they attempt to make it big in London?

Alter Ego
Director: Moses Inwang
Synopsis: Alter Ego tells the story of a relentless lawyer whose mission, focus, and purpose is justice for victims of sexual assault. She goes great lengths to prosecute sex offenders and molesters stopping at nothing to ensure justice is served.

Lotanna
Director: Toka McBaror
Synopsis: A young boy discovers at an early age that he has to offset a 20 million naira debt owed by his father to a mysterious Don Creflo. Little does he know of the trials and challenges ahead that stand to either break him or make him.

Mansoor
Director: Ali Nuhu
Synopsis: Mansoor and Maryam become intimate in school but a group of bullies wouldn’t let them be. One day Mansoor is beaten up and Maryam starts avoiding him. His quest for her change in behavior eventually leads him on a journey to discover his identity.

Slow Country
Director: Eric Aghimien
Synopsis: A homeless teenage mother, armed with her desperate ‘mother instincts’ to provide a safe haven for her son, gets trapped in prostitution and drug trafficking. Trouble erupts when she decides to turn a new leaf as her boss, a ruthless human and a notorious drug traffic king, won’t let her off his leash.

Excess Luggage
Director: Damijo Efe Young
Synopsis: Two cousins (Douglas and Eyinnaya) separated by physical distance and financial status reunite with raised voices and slammed doors for a discovery that true happiness does not lie in rags or riches.

10 Days in Sun City (closing film)
Director: Adze Ugah
Synopsis: Bianca, a campus beauty queen who Akpos has sacrificed his livelihood to make successful, wins a national beauty pageant and becomes both the global ambassador and the face of a multinational conglomerate. The conglomerate is owned by ‘The Old Fox’ who has plans for her to play a bigger role in his ‘life’. Will Akpos give up his love or will ‘The Old Fox’ loose?

The Nollywood Travel Film Festival seeks to strengthen the value base of the Nigerian film industry for development, investment and realization. For the programme of events, please see the schedule below:

Next Post Movie Review: “Roti”, A re-incarnation story with Kate Henshaw in the lead was exceptional!