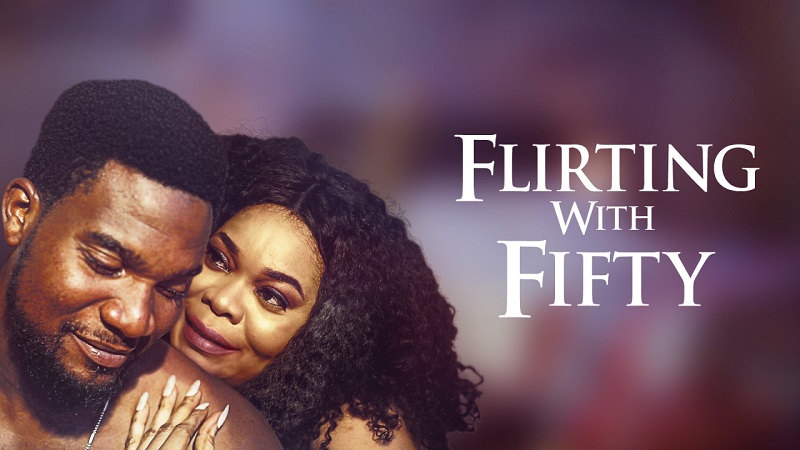 Flirting With Fifty kicked off with all the good looks: brilliant colors and a clear sound. Kunle Remmy (Sobi’s Mystic) played Tobi, an unwilling gigolo who comes across a smitten Betty (Chinyere Wilfred) at a club. One thing leads to the next and he ends up with her business card. He’s an aspiring musician who lives with his older sisters (Mimi Orjiekwe and Belinda Effah) in an apartment where the landlord keeps threatening to kick them out.

Belinda Effah (Happy) played a self-seeking ball of greed to hilarious levels. Her plain costumes (by Mary Abubakar) were the right match for her character. It was she who found Betty’s card with Tobi and coerced him into the illicit affair. And it was into her account Betty made all the money transfers. She was like the spokesperson for the triad.

Onyi Alex (Hello) played Whitney, Betty’s daughter, an anti-gigolo gonzo who would do anything to send Tobi away. Her fiance (Daniel Lloyd) appears supportive of her stance but secretly has eyes for Betty. Tobi’s first night with his benefactor saw him overdressed till the next day, like he merely passed the night. Nothing from the director in that scene was showy enough to tickle my fancy. Tobi’s last night with Betty had her dead by the next morning. Soon he was facing a miserably crowded courtroom, being charged for murder.

This is a sixty-minute film that took over two hours. A lot of scenes had dialogues that went on for way too long, like whenever Belinda Effah or Onyi Alex had to make a point. The makeup on Chinyere Wilfred (whether appearing dead or not) was immoderate and heavy, the same going for Onyi Alex. The general hairdo wasn’t impressive either, except on the male cast, Belinda Effah, and Peggy Ovire (playing the defense attorney).

Barrister Tega (Sonny McDon playing a prosecutor) may have been well dressed but his performance wasn’t resonating with me. Camera angles and the soundtrack weren’t exceptional. The locations were on one hand too ostentatious, on the other hand too bare. And though the film may have ended well, the suspense was still visibly absent. Directed by Tissy Nnachi (Double Stud, Wife For Rent), Flirting With Fifty is a hardly exciting plot revolving around lust, greed and sex.

This film shows on iROKOtv and is rated 3/10.