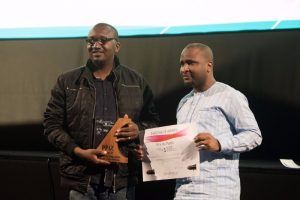 More feathers have been added to two caps. The Wedding Party and ‘76 have jointly won the 2017 Nollywood Weekend Audience Award. They also both received the 2017 Nollywood Week Public Choice Award. The trophy for the festival was given to Izu Ojukwu (‘76) and The Wedding Party‘s Executive Producer – Moses Babatope. The event took place during a closing ceremony preceding the world premiere of Catch.er – Walter Banger’s latest feature.

“I did not expect this award, it is a real honor for me and for all those who worked on this film,” said Izu Ojukwu. ‘76 is a thrilling drama told from two points of view: that of a pregnant woman, and that of an accused soldier, her husband. Inspired by the cataclysmic Nigerian events of 40 years ago, this epic political thriller portrays the point of views of a respected army captain and his expectant wife when his coerced participation in a botched coup attempt makes national headlines.

NollywoodWeek Paris is an annual event dedicated to showcasing the best of Nollywood to a French audience. Now, it’s known to the 62 million inhabitants of France, the birthplace of cinema. The festival is organized by Okada Media, an association based in Paris, France headed by Serge Noukoué and Nadira Shakur.

Moses Babatope, who represented the The Wedding Party (in the absence of Kemi Adetiba – the director), expressed joy at receiving the award, considering it auspicious. The film tells of the chaos that prevails when two families prepare for a lavish wedding. The blockbuster featured Richard Mofe-Damijo, Adesua Etomi, Ireti Doyle, Sola Shobowale, Banky W, Ayo Makun, Alibaba, and many others.

Next Post 5 Things you need to know about #TWP2 Director Niyi Akinmolayan.