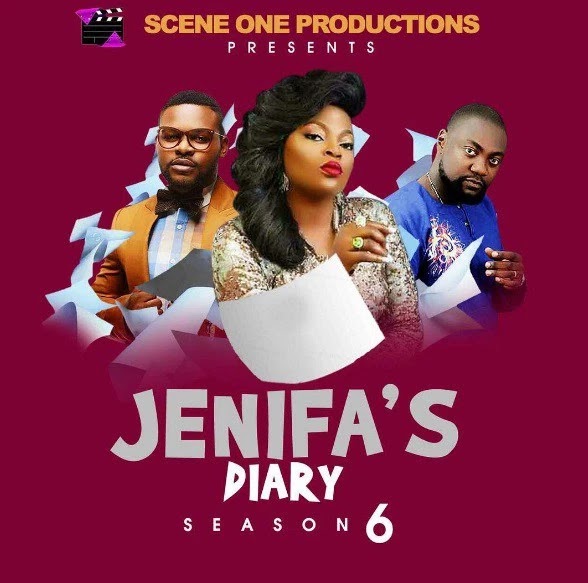 Jenifa’s Diary (Season 6) is a rib-cracking, teeth-biting, jaw-dropping adventure. In the first episode, Dayo (Yemi Blaq) is slated to marry Jenifa but is fed up with her English and complains to his mother (Toyin Afolayan). She’s hardly disturbed by the news but urges him not to forget what he’s really marrying her for. This reason, unfortunately, is kept a mystery.

Subtitling (by Neecee Entertainment) was impressive, but “ma yorbun lasiko taa wayii” was wrongly subtitled as “a stitch in time saves nine”. It actually means, “do not be lazy at this point”. The script was creative but had unequal doses of comedy per scene. Jenifa and her mother (Tola Oladokun) talking about marrying Dayo by hook or by crook had to be one of the most hilarious parts in this series.

I also loved where Esther (Jumoke Aderonmu playing a materialistic petty thief) outsmarted her 419ners. She even stole from them. You should watch it. Not all quarrels (especially in public) are real. Strangers arguing around you might be robbers about to spring a surprise. Her mindset is set to steal or sleep her way to wealth. She’s introduced to a new prostitution-ring madam (Joy Nice playing Pelumi). But as fate would have it, they knew each other before and were not on good terms. I expected someone much older for the role anyway even though I find Pelumi’s rage livid enough.

Toyosi (Olayode Juliana), Jenifa’s housemate and bestie, isn’t and wasn’t forceful or above-board-entertaining in her role, I mean – even Yemi Blaq (A Place in the Stars, High Blood Pressure) gave us a jagaban dab.

Adaku (Omotunde Adebowale) plays Jenifa’s close friend who joins a multilevel marketing scheme hoping to break it rich. Here she seals her doom permanently by collecting other people’s money deceitfully (#500,000) and giving it to the organization that parades itself as a bank. Even if the scheme works, her reputation and credibility – with her aunty and nephew – are forever ruined. Omotunde Adebowale (Award winning radio and TV host from Wazobia FM) plays this role to perfection. Its amazing when an actor is so totally lost in a role that I forget I’m watching a play.

When she eventually goes back and realizes it’d been a scam, she doesn’t faint. She doesn’t even sit on the floor and scream or have a heart attack or anything. After putting me on serious suspense for three episodes, this climax was dry. It felt like giving a glass of warm water to a sun-beaten thirsty man. Almost immediately, her sister calls her telling her policemen and a crowd of creditors had gathered at their residence, all of them looking for her. Sadly the crowd wasn’t shown, only the news was delivered.

The writers (Tunde Olaoye, Akinola Akinlade) allowed Adaku to move into Jenifa’s place. She’s still loud and uncouth, even to the newly-met Toyosi. How she got her big travelling bag out of her apartment with all those people waiting outside her at her house is still a mystery.

With every new episode an interesting character gets some good spotlight. Here (Traditional Wedding – Episode 5) we find Waheed, Jenifa’s brother, to be a complete body of comedy and boiling hormones. He gives one aso-ebi to his girlfriend in a hilarious scene that could have been pulled out of Africa Magic’s Yoruba channel.

I find it out of place for Dayo to be so brazenly unconventional in public places, like demanding a game of cards in a workplace and doling out tips of two thousand dollars (yes dollars) to a hotel doorman. His engagement party turned out to be very impressive. Everybody had sown their aso ebi, differeng styles. The canopies were set and the music was loud. Guests were plenty. The overkill were the ribbons on the black jeep.

Laide (Tunrayo Adegboye) joins jenifa from Ayetoro but seems to be trying to hard to spoil her English. She’s supposed to be a Jenifa protegee of some sort but unfortunately its not yet working for me. Aerial photography (by Moe Musa and Heywhy Samba) were mainly of Lekki and the music by Fliptyce was just okay. Nothing exceptional.

Finally Chisom (Augusta Chibuike) decides to lure Adaku into a police trap. This episode leaves me very unsatisfied with how Adaku was apprehended by the police (Adekunle Bello, Dennis Ovie, Ifeanyi Chukwu). Waheed and his partner in crime (his buddie) do not fail in their comedy. Their scenes felt like a quick getaway from the current movie’s genre.

In a scene, Jenifa picks Esther’s call and rushes to meet an enraged Yemi Blaq who ripped his top to shreds – because he was upset with the hotel’s services. I’m still unsure however whether the hulk-ripping-move was in slow-mo or the fabric was initially too hard to tear.

Soji (Babaseun Faseru) was very uninteresting. He plays Toyosi’s boyfriend. His lines sounded memorized. I often felt impatient whenever he and Toyo were talking, restraining myself from fast-forwarding. No lessons to learn from him, except more of his insults and despise for Jenifa. How can Toyosi even stand it? How can she stand him talk of her bestie and housemate that way? She doesn’t take any stand till the next episode (The Setup 1 – Episode 9).

Femi Durojaye (Heart – 2016) played a police boss and his office looked very decent for his rank, the right props were well used. The roundup of the kidnappers (Oyelusi Adefemi, Eli Ojoh, Folarin Adeyemi) by the policemen (Darmee Ahmed, Omonira Michael) lacked any animation nor adrenaline. None whatsoever. I saw only one cop and didnt even see the face that told the hoodlums not too move.

Lara Johnson, Yemi Terry and Oluwayimika Adebanjo really tore up the scene in the cell where Pelumi (Joy Nice) had been sent for her crimes. When Adaku uses Jenifa’s prison visit to invite her boyfriend (Samsudeen Tijani) over, and Jenifa comes home to find him, his puzzled expression and flailing getaway was the perfect way to end the episode. A fine scene saved for last 🙂

Folarin Falana (Couple of Days – 2016) aka Falz the Bahd Guy makes his appearance in this episode (Love at Last – Episode 11, with a huge runtime of thirty minutes) as the America-returnee. His heavily ascented English and fresh costumes sent me in the wrong direction. I thought “Awww, finally, Jenifa has found true love”. The scene before and during his proposal was definitely touching. I felt my heart race.

For the first time, an episode (Lost Love – Episode 12) lives to its title. The blessings Jenifa had thought had come with Sege (Falz) turned out to be a ruse. Sege opened up on his great plans for Jenifa. Firstly, they would get married and only then would he travel back. But before travelling he wanted to open a salon for Jenifa in Ekiti State, where he’d impregnate her and keep her with his mom.

Jenifa’s reaction was epic. Love and hate may really be two sides of the same coin. How did she quickly remember she was wearing his engagement ring? In a flash she had removed it, given it back (I’m surprised she didn’t fling it), screamed at him, and stormed out, ignoring or forgetting to even taste her spaghetti Bolognese. But frankly, some ladies (with the numbers hopefully thinning out) settle for such lives till today. But who is to blame when the steely hand of society can be inconsiderately overbearing.

Costumes (by Scene One Productions and Bisola Balogun) went haywire for a change on Adaku in its closing episode. The tinted gallas haircut and big bangle-looking earrings were the baddest ever! Adaku would probably wreck London in Season Seven.

Jenifa’s Diary is comedy out-of-bounds, a goldmine of moral lessons, and an inspiring big picture. Its by all means a recommended watch.

Watch the the video clip here: