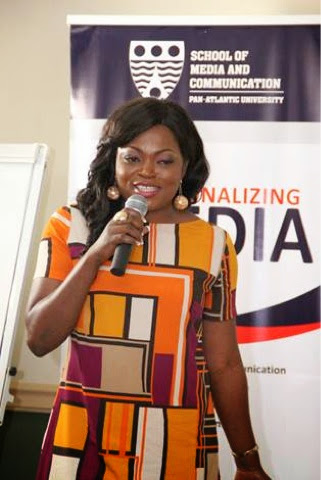 The Nollywood Studies Centre of the School of Media & Communication Studies, Pan Atlantic University recently hosted screen diva and producer Funke Akindele. She spoke on ways she has tried to promote values through film. Here are some excepts:- How exactly did you get into acting?I always wanted to act and I had the full support of her mother. After obtaining an Ordinary National Diploma (OND) in Mass Communication from the Ogun State Polytechnic, in 1995, I decided to study Theatre Arts. However, my father insisted that I study Law and I eventually got a spot in the University of Lagos to do just that. But this did not stop me from attending auditions and seeking any entry point into the film industry.
Her first role?My first role came in 1997 in Opa Williams’ Naked Wire, from then on, other minor roles in a couple of other movies came. My big break came with the television series, I Need to Know, which was directed by Lloyd Weaver and produced by his outfit, Swift Studios. It was a major break in more than one sense because I seized the opportunity to learn the ropes of production. But this still did not open the doors of the English filmmaking sector. I had better luck with Yoruba films, which I turned to on the advice of others.
What inspires your choice of roles?The desire to promote good values as well as the need to give back to the society and make a difference is my driving force. Before I take up any role, I think about the message I’ll be passing. My choice of roles as an actress is guided by the framework of the Nigerian culture and its value system.  The importance of promoting good values, especially with respect to the protection of children, my personal brand, has sometimes necessitated my request that certain aspects of a screenplay be toned down in order for me to accept the offered role. Her first production?In 2004, I decided to bring into play all that I learnt about production on the set of I Need to Know, and made my first film, Ojoketala (The Thirteenth Day). Delving into production was facilitated by my curiosity and interest in learning about the different aspects of filmmaking. When I make films, I oversee every aspect closely such that a cinematographer once asked me with irritation whether I am a camerawoman.  Ojoketala was followed by other films such as Itanu and Taiwo Taiwo. But the film that has made me well known, and which turned out to be one of my challenging roles, is Jenifa. Why Jenifa?My decision to make Jenifa arose from the desire to make an impact by passing a message on moral norms aimed at parents and their daughters. In this case, I was more concerned about prostitution in university campuses. However, the realization that similar stories had already been told in other films underlined the need to tell the story differently so as to make the message register, hence the use of humour.  Producing Jenifa was difficult, due largely to the challenges faced in raising the funds. It was not my intention to play the lead role but, after three days of fruitless auditioning, I had to take it on. The character Jenifa  was centered around the idea of a “wannabe village girl” and she was imbued with different mannerisms that had been observed in different persons. A lot of research for the character was carried out even to traveling as far as Oshogbo, Ilorin and Ibadan to get the dialect right. On giving back?The need to give back to society was what necessitated the creation of the Jenifa Foundation. The Foundation aims to nurture individual’s talent for the creative arts by impacting knowledge through training. As such, workshops and other activities like as fashion designing, make-up, hairdressing, bead making and drama are organized on that platform. The Scene One School of Drama has also set up to contribute towards the needed manpower development in the film industry.
The Nollywood Studies Centre will be hosting prolific film producer Emem Isong next.
Follow @xplorenollywood for more details.