Tuesday, 29 Nov 2022
By Turidee - October 13, 2013
44 0
I had basically said in my last post that the NMA’s organized by Nollywood Movies Sky 329 needs to put its back into creating an awards that will stand the test of time and when I say stand the test of time, I am not talking about its selected categories or their nominees list or the glitz and glam that they feel would be associated with an award ceremony but having a properly directed or produced ceremony that will leave us saying OMG, that was a show.
I attended the second edition of the Nollywood Movie Awards NMA, and after waiting for 2hours for the ceremony to start, I wasn’t impressed, let me re-phase, it wasn’t an award show that represents the industry  (in other words, their standard was crap) and I must add that after 20years Nollywood still has a long way to go.
I would not get into the whole African timing thing, I guess the organizers can get away with the fact that the time was used for the red carpet interviews, picture sessions and all but if the Host of the show turns up at 9pm for a show that was meant to start at 6pm, what time exactly did she have to rehearse and check out her lines? After working the red carpet for a bit one thing that was terrible absent from the scene was the A list Nollywood stars and you know the acts I am referring too.
On getting into the hall, it felt like a Nollywood movie! Very everywhere and no clear focus on where they were headed. The décor was acceptable, nice ambience but poor sitting arrangement (I would advise for the future, it’s ideal to have your nominees, presenters and special guest sit together on tables that are properly labeled with beautifully dressed ushers guiding people to their rightful seats), a teleprompter that was far and making the presenters more confused than assertive and performances (omgosh) for what I saw before I left which was about midnight, a music act I can’t remember his name and the dude with the puppy puppet .  What came to mind with what I saw just begged my question, why isn’t Nollywood letting its creative juices flow? I watched Oscars ceremonies that Billy Crystal, Hugh Jackman and the cast of Glee performed and guess what, they performed to songs that comprised of the movies that had been nominated for the year and their sound tracks. Hosts that came out with different outfits and costumes we could barely keep up and scripts filled with just the right words and jokes that were precise, witty and straight to the point. Yes Hollywood has come a long way, but Nollywood has to develop
the spirit of insight, creativity and thinking out of the box soon.  And even though this awards wasn’t a Nollywood production, NMA has decided to represent Nollywood or better still award the industry, so it should do well to be a proper representation and buck up to churn out the best.
At a point, I scouted the hall and wondered where the music industry peeps are? The entertainment personalities and reporters. They were nowhere to be found! Hmmm…maybe AMVCA had more clout (obviously) since its DSTV so NMA’s have to go back to the drawing board and figure out how to get the music peeps, entertainers and reporters actively involved as well. Don Jazzy was present to handle a category but just as he gets on stage, the power goes out or some sort of fuse blew (hian)!!! Heard the Limpopo crooner was expected, but I couldn’t stay on to see his performance.
As it relates to the awards proper, there were some categories and its winners that I was happy for, ‘Last Flight To Abuja’ for ‘Best Set Design.’ ‘Phone Swap’ for ‘Best Original Screenplay’ and ‘Best Movie’! Yay!!! Some winners amazed me, but I took that out on twitter. I don’t get how ‘HoodRush’ a movie that premiered recently made the cut for this award though? But like I said, NMA have to be extremely transparent with what their guidelines and rules are.
For a full list of all the winners, here you go:- 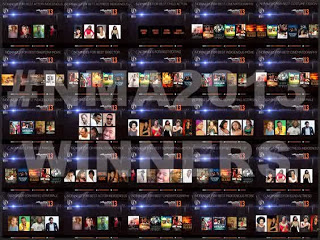