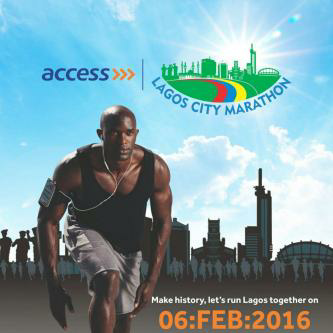 Asides the many reasons associated with running a marathon such as losing or maintain weight, strengthen your heart, reducing blood pressure and keeping cholesterol in check, on Saturday, February 6th, 2016, about 50,000 marathoners are expected to gather by 7.00 a.m. at the National Stadium gate for the start of the Access Bank Lagos City Marathon and its lucrative prize money.

With about N92 million up for grabs for marathoners, who can run from the National Stadium Surulere to Eko Atlantic City, a distance of approximately 42 kilometers, in less than three hours, Lagos City Marathon is a sure bet cash cow for those who earn their living running road races and marathons around the world.

Its prize money of $50,000.00 each, for the first male and female winner, makes it one of the two most lucrative marathons in Africa, the other being the Comrades Marathon in Durban, South Africa. It also ranks among the world’s best.
Therefore, it is not surprising that elite marathoners across the globe are all heading to Lagos in order to compete in the Access Bank Lagos City Marathon.

For participants who are interested in winning this prize money or simply running a marathon, you can visit the website www.lagoscitymarathon.com to register or pick up a form from Teslim Balogun Stadium, National Stadium, Onikan Stadium as well as Rowe Park Sports complex.

The 42 kilometer marathon will kick-off at the National Stadium to Gbagada express, up into 3rd mainland, through to Ikoyi and the Ikoyi Link Bridge into Lekki, onto Ozumba, Lekki toll, turn into Akin Adesola, then Bishop Oluwole and round off at the Eko Atlantic City.

Previous Post Be Heard: 5 Easy Steps To Vote For Your Favorite Stars At The AMVCAs!!!