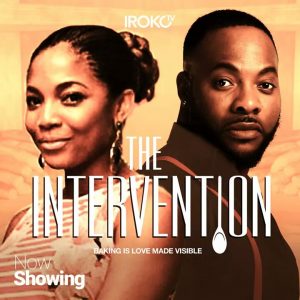 People that have excess money can buy love, and sometimes happiness too. What about philandering men? They can afford to hire women to pass off as their girlfriends until they are really ready for the journey that is marriage. At least this is the message we get from The Intervention. Love happens unexpectedly in this one, and it is quite enjoyable.

Tunde Da’ Silva (Bolanle Ninalowo) is in his mid-thirties, he has never had a stable relationship and this disturbs his parents Mr and Mrs Da’Silva (Francis Owochei and Jennifer Eliogu) they have had a very happy marriage and thirty years down the line, they still live in the honeymoon phase. Their concern for their son’s lack of a stable relationship forces them to pay him a visit. He decides to hire Arit (Chelsea Eze) to act as a girlfriend. Arit is an orphan and she is trying to start up a bakery. It is her perfect opportunity to make some money and she goes for it. Tunde promises her a large chunk of money, and to start her bakery she plays along. Eventually, they fall in love because his parents intervene and there is a connection between the two. Her old friend, MJ (Frank Echebe) who connects the two seems to be in love with her but this is just a distraction from the writer to keep us hooked.

We have seen many stories of this kind in Nollywood. From Hire a Man, to Housegirl Lover, and Wife for Rent, all this films have similar story lines. Remi Ibinola spices up the story by giving us an orphan as a lead. There are a lot of intrigues but it does not come from the lead characters. The writer allows the older couple to have a nice and glorious time on screen. That is truly the saving grace of the film. Going by the story, it is something we have seen executed in Nollywood, in the same way, and so it cannot be the reason why “The Intervention” is interesting.

The best acting in “The Intervention” does not come from Chelsea Eze or Bolanle Ninalowo but from Jenifer Eliogu who is bold and exceptional engaging, as the sassy, and adventurous mother to the playboy turned serious lover. Her time on screen will make you love the film, it is smooth and worthy of commendation. Her chemistry with Francis Owochei is engaging, and we wish the story was about them. The acting from Chealsea Eze is lukewarm but Bolanle also does well.

The visuals and sound of the film is okay.

The Intervention earns a 7/10 from Xplore