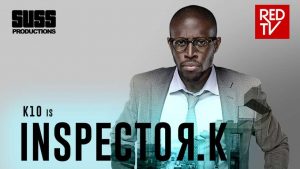 We had quite an exciting reception for the first episode of “Inspector K” we have finally watched the series finale and have a final verdict. Everything about “Inspector K” is not conventional. The series has only five episodes and is perhaps one of the most hilarious Nigerian series you can find online.

The first episode leaves us eager to meet the killer and when we finally do, we are shocked. In the fourth episode, Inspector K has a confrontation with his neighbor who is a cross dresser. While he fights with his neighbor, he spots an acrylic nail, which is similar to the one found in the murder scene. This helps him find the murderer.

The series started impressive and every episode after has been impressive, even though we are left a little underwhelmed with the finale, Inspector K is a good series. The first way the finale fails at impressing is by having “Inspector K” and the Murder Doctor on a TV show where they discuss how they came across the murderer. Inspector K continues as the attention obsessed Inspector but unfortunately, the banter they have on screen is unnecessary. We have become used to the character of Inspector K but in the last episode it is exaggerated and over the top. Secondly, while we understand the whole idea of the show is to create an unusual series, it is however, unexpected to see that the killer is a cross dresser that is dissatisfied about how he lost out on a wig.

The final episode introduces the major cast to us again, while this is interesting to watch, the final episode is forgettable. We can tell everyone of how impressed we were watching a series on an unconventional inspector trying to solve a murder case but in its final stages, we cannot really explain it.  We are left expecting more, it could have been better. We give credit to the writers for whipping such an unconventional story which made us laugh with its short stay and a story capable of inspiring other writers to create out of the box content.

Koye Kekere, with ‘Inspector K’, has not only launched himself as an enjoyable actor but has gotten a little more attention for his online skits. This should be the start to many more acting gigs. We hope to see him on the big screen soon.

Next Post “Mourning Karen” is quite an Intriguing film