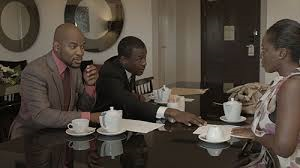 There are millions of girls who will have a baby with me, for the right price… Peter Popolampo

Successful businessman Peter Popolampo is the ultimate alpha male and a staunch bachelor. Despite his mother’s persistent attempt to find him a woman, to settle down with, Peter sticks to his guns of a non-committal casual relationships, freedom and complete control of his life. Not wanting to live solo for the rest of his, he devices a structured means to have a child without the normal drama that comes with it. Enter Abena Boateng, a crude but clever local girl who is anything but impressed with Peter’s influence. With a clear definitive contract outlining the dos and don’ts, these two opposites must exercise every ounce of will power not to kill each other until their child is born.

The choice of characters for this movie was totally apt. Haven’t seen any of Yvonne Okoro’s movies so imagine my surprise as I watched her hold her own against top industry people like Benjamin Joseph and Hlomla Dandala. As a crude girl she was almost village like, naïve but still held on to her pride. I would have preferred her a bit older than 27 but been that age wasn’t too bad.

Joseph was awesome, his character played an extremely vital role in advising his loyal buddy and not insisting his friend change his ways, I loved his demure and carriage playing this role was a winner for me and I can’t readily think of anyone who  the role suited more like it did Joseph.

For the main attraction, Hlomla Dandal was my champion. While on Channel O as a VJ, I had watched and enjoyed his style of presenting. As Jacob Makhubu of Jacobs Cross I adored him and as Peter he was spot on. He was a good alpha male, running his life as a routine and never wanting his schedule broken. His role was totally relatable to what we have out there and when people say roles are made for certain people, this role was created with him in mind and it was totally commendable.

Can’t say much to the script writer who did well. When I watch our Nollywood movies, an American version comes to mind but I’m proud to say that with The Contract it wasn’t so.  The woes came in with directing though! Picture quality wasn’t too sharp, had the usual dark scene and some angles where not flattering to the characters. The sex screens and its unflattering sound like it was either porn or a herculean task to have sex, felt over done. I would love to know, what the director thinking when Peter and a pregnant Abena were making out and he was literally on top of her tummy!

The Contract is the second Ghanaian movie I totally enjoyed and for this production, Xplore hands you 6.5/10.