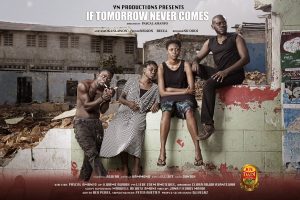 It took me too long to watch Yvonne Nelsons “If Tomorrow Never Comes” because despite its striking and moving trailer, I was not too sure of what to expect. The film was teased from pre-production to production stage. The death of its young star also further drew attention to the film. Yvonne Nelson’s “If Tomorrow Never Comes” is a moving piece of art. 90% of it is purely interesting, they let us down with the last minutes but no art is too perfect and that is why we bring you a review.

Abena’s single mother struggles to train and sustain her children. With the lack and desperation to get them good food or sustainable amenities, she sleeps around with men. When the village committee finds out about this from the same men she has given herself to, they slander her and humiliate her. Unable to take the insult, she commits suicide by hanging herself. Abena finds her. The death of her mother makes the villagers take her to a new land for care; they take her brother to relatives. As a lady and a virgin, Abena is offered to a Goddess who sustains her life chain by taking advantage of young virgins. When Abena falls in love and eventually gets pregnant, this is a desecration of the oath sworn and so she is moved to a baby factory. Women are killed as soon as they have their kids, when Abena finds out; she escapes with Ama (Becca) and another pregnant woman who dies of exhaustion.

They end up in the city and have to face city struggles. Ama loses her child and dives into the city night life; Abena on the other hand is concerned about finding the father of her child. She eventually does, but he is not all she thought he was. Death comes knocking again, and Abena loses her boyfriend. Abena has her child, who is born with a severe medical condition that makes him unable to talk, walk or eat properly.

Pascal Amanfo whips the story in stages. We watch an unhappy Abena who tells her story to the press. She is a testimony, because she attempts suicide like her mother, and even after doctors certify her dead, she still comes back to life. Pascal is a staunch Christian and most of his films advocate for Christianity. “If Tomorrow Never Comes” draws us in as a social message on poverty, girl-child neglect, and prostitution, but it is a religious message about hope and the mercies of God. We only know this in the last scene. This is where the problem of the film comes from because the life of Abena is portrayed as a miracle (and, it is) but the execution pushes too hard on Christianity. Sometimes it shouldn’t be mentioned, the story will do.

The story is wothy of acclaim for its exploration of girl child neglect, and patriarchy. It also launches an indirect attack on poverty. “If Tomorrow Never Comes” is an educative and entertaining film. Yvonne Nelson is impressive, she carries the story well and we appreciate her as Abena. It is probably her best performance till date.

Pascal Amanfo does a great job as a director and a writer. We definitely recommend this production.

If Tomorrow Never Come earns an 8/10 from Xplore

Next Post Series Review: Desperate Housegirls Season 3 is a Must Watch!