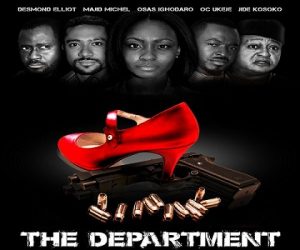 Tolu (Osas Ighodaro) is a computer guru, she helps a private organization hack into the computer storage of several high profile companies. She also assists in ruining the reputation of many cooperate organizations, including the lives of Mr. Effiong (Desmond Elliot).  She quits her job after hacking and transferring every fund owned by Mr. Effiong to her boss (Jide Kosoko) who in turn tries buying Mr. Effiong’s company. Tolu wants to concentrate on her husband, Segun (Majid Micheal) but she is needed for more operations in her department.

When she decides to return to the organization, it causes a rift in her marriage. Her husband who used to complete the dirty work with the department also decides to go against them, he tries to form an alliance with Mr. Effiong.

The idea of the film, “The Department” is to create a thriller. The first scene of the film is impressive and promises a great story ahead but unfortunately, our expectation is lost thirty minutes into the film. “The Department” ends up underwhelming its audience because the story concentrates on creating a thrilling experience that is not realistic and which lacks a solid foundation. The writer forgets the audience and enjoys the world of her creation and when she communicates this to us, it is difficult to keep up with the story.  An infusion of fewer characters, a better break down on actions and a better strategy to execute the story would have made ‘The Department quite enjoyable”.

The last scenes feature an action sequence and unfortunately, this is underwhelming. It is unnecessary. At that stage the story gets unbelievably difficult to follow. We know that Tolu is trying to save her husband from being murdered but too many things happen and complicate the plot.

The film is star studded. It features an impressive cast including Udoka Onyeka who makes a cameo appearance. Somkhele Idhalama is in a supporting role, and she does well. Seun Akindele, O.C Ukeji, Majid Micheal and Osas Ighodaro do a good job of leading the cast. Osas is impressive and she shares an impressive on-screen chemistry with Majid Micheal. The cast saves the film from lacking substance, they perform well and even if we hardly enjoy watching the department, we remember that an impressive cast is employed to make the story come alive.

The Department earns a 4/10 from Xplore.

Previous Post “Mourning Karen” is quite an Intriguing film