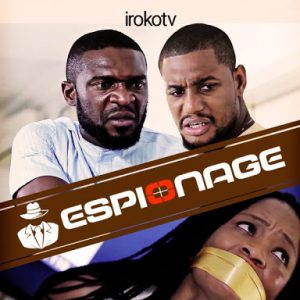 There are several rushed projects everywhere in Nigeria. Sometimes systems that do not exist here make bad content for films. How many undercover agents do we have in Nigeria, and how good are they? If we had so many, shouldn’t the crime rate be low?

“Espionage” does something usual, it is not only a film about an undercover agent, but the agent is also female. The story had an opportunity of creating a strong, empowering and a focused female undercover agent, but it fails to. While Grace (Uru Eke) is focused, the script writer ruins it by documenting her sexual adventures with people she should investigate. All these people are not shown, but while facing a jury, Grace admits to doing this.

Grace (Uru Eke) is an undercover agent; she has been successful in destroying many fraudulent people but unfortunately she fails at a very important task and she has to face a jury because of this failure.  Two brothers Kingston (Kenneth Okolie) and Maxell (Alex Ekubo) are in the process of mourning their father but the police are after them because they have been involved in several fraud deals, they have a new target and it is a bank. When they request a writer to write their father’s autobiography, Grace is sent by her agency to act as the writer and also uncover relevant secrets that could land them in jail. We are taken through this story when she is being interrogated by a jury.

She goes into their home as a writer; she plays the game quite well. She is the investigative writer when the brothers are available, and when they are unavailable she goes snooping to find concrete evidence to incriminate them, it is while doing this that Kingston gets suspicious, and decides to monitor her.

“Espionage” starts really interesting and the film happens in less that seventy minutes. Grace is a reason to continue watching the film but unfortunately deep into every job, she sleeps with a male client, and when she is sent to investigate Kingston and Maxwell, she starts a relationship with Maxwell. The intention of the writer is not properly established, we cannot really tell if the idea is to shame women with such jobs, or to portray Grace as “just human” and capable of falling love.  It is not properly established if this is her weakness or not. This creates a big problem for the story. If the writer wrote Grace as a male character will he have to sleep with every woman he has to work with? Male characters hardly get written this way.

For her last job she ends up pregnant with the child of Maxwell. The story gets confusing midway, it could have been better.

Uru Eke does a good job on this one, Alex Ekubo and Kenneth Okolie are also impressive. While we do not enjoy the story or its purpose, the actors give good impression with their performances.

Next Post #TBT Review: Yvonne Nelson’s If Tomorrow Never Comes is an Elevating Piece of Art