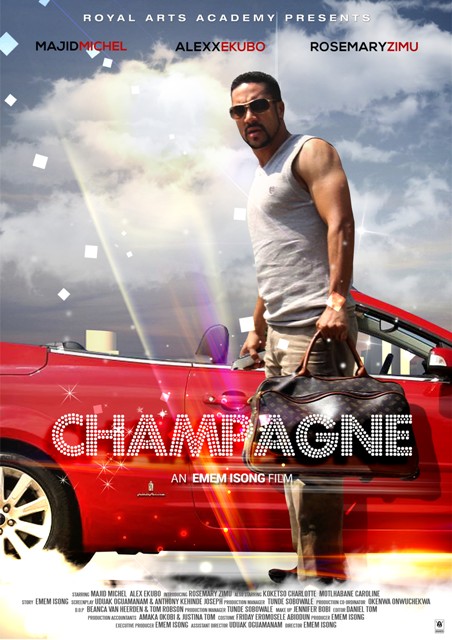 Maybe subservient, maybe overly permissive, Champagne (awkward name, we agree) watches her husband establish affairs with married and single women to be able to sustain their lifestyles. Champagne (Rosemary Zima) and Tari (Alex Ekubo) are without jobs and the only way to survive is for Tari to sleep with rich single and married women. Champagne meets one of Tari’s clients,Danielle (Koketso Charlotte) who shows up at his house. She is heartbroken when she finds that Tari is married. The display by Danielle prompts Champagne to talk her husband out of the call-boy-business. They go broke, and coincidentally, Champagne meets Douglas (Majid Michel) suave, extravagant and a young widower who has interest in her.

Tari (Alex Ekubo) sees the perfect opportunity to reap Douglas off his wealth, and so with a few persuasive words he gets Champagne to go out on a few dates with Douglas. She falls in love with Douglas, but the biggest villain of the story is not the dubious duo, Tari and Champagne, it is Douglas.

Emem Isong is a successful producer and it is impossible to credit thriving producers in Nollywood without mentioning her name. She does a good job of collaborating with actors from Nigeria, to Ghana, down to Cameroon, and in Champagne; she collaborates with a few South African actors. The film is also shot in South Africa. It is also worthy to note that there was strong publicity for “Champagne” when it made its debut in 2014, the stars came out in their numbers to celebrate and help promote Emem’s directorial debut. An efficient producer does not always equal an incredible director, and “Champagne” proves it.

The first half of “Champagne” is alarmingly slow and it takes the viewer the gift of having the grace of exceptional patience to pull through the long minutes.  The scenes happen too quickly, they are quite confusing, and it looks like scenes were compressed in the editing lab to create a full film. “Champagne” only gets interesting in the last fifteen minutes and that is because there is inclusion of some alarming action. A few threats from a heartbroken man and a flashback of a murder scene are capable of waking the passive viewer and in “Champagne” it is the only thing that wakes us up from the slow film, and it is also the only scene that works efficiently.

The actors do their best to save the story. For all its worth, Emem Isong hires really good actors. Maajid Michel is impressive as always. Alex Ekubo is enjoyable and the South African gem Rosemary Zima is lovable.