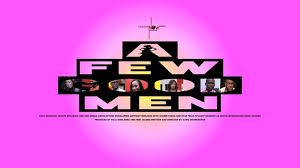 Society is not always nice to women. There are many unresolved violence stories in our society, and unfortunately we do not talk about it enough. Domestic violence/rape and other forms of gender abuse get our attention for a short time and we move on. Nigerian films even do a greater disservice to these problems. I have watched many films that have either excused or treated gender based violence lightly. A Few Good Men lures us in as a romantic story but it is far from that. It is an advocacy tale and it is a good film.

Fred (Joseph Benjamin) is in a relationship with Ivie ( Uru Eke) he meets an old friend Toks (Oreka Godis) and they rekindle their friendship quickly. Fred is one of the rare ones. He is kind, understanding and has every other admirable quality that men have rejected. Toks mistakens his kind behavior towards her as interest for a relationship, but Fred is committed to his relationship to Ivie. And while many women pray to find kind men like Fred, Ivie loathes his kindness. She wants something different. His kindness is a problem to their relationship, and so she signs out.

On the other side is a couple Ada (Kate Henshaw) and Phillip (Anthony Monjaro) they are having problems because Phillip is insecure. Ada is from an influential family and does a great job of being a formidable force at work, Phillip finds this unbearable. They eventually break up. While Fred and Ada get closer after they end their relationships,Phillip and Ivie start a relationship and even get married. Ivie goes fron having a good man to being a victim of domestic violence. On the other hand Toks starts dating Wale (Deyemi Okanlawon) a very close friend of Fred. Things are good until he rapes her.

These issues call for concern as e these people are directly linked to a concerned Fred who wonders why there are no agencies in Nigeria fighting the injustice that Nigerian women have to go through. A Few Good Men benefits from a good writer who stylishly starts the film as a romance flick, and instead projects the gender bias in our society. This particular strategy to promote the film  as a romance flick is proof that Nigerians do not really pay attention to social conscious films but will pay for a flick that offers a different kind of excitement. The writer also offers a solution to the public on how to fight the problem of gender based abused; unfortunately he offers solution in dialogue and not action. Action speaks louder than words, and in this case action would have been best. I would have loved to see all the men face action for the crime they committed against the women.  As a society we need to speak up.Your voice is power. At the end of the film, the writer admonishes everyone to speak up and it is the most interesting message from the series.

The film also packs interesting actors.  Uru Eke is enjoyable as Ivie, she is convincing as the violated wife concealing the violence at home. Kate Henshaw sustains the script, Oreka Godis is enjoyable and there is also the impressive Joseph Benjamin.

Next Post Bubbling Under; 4 Acts we want to Lead Box Office Hits!